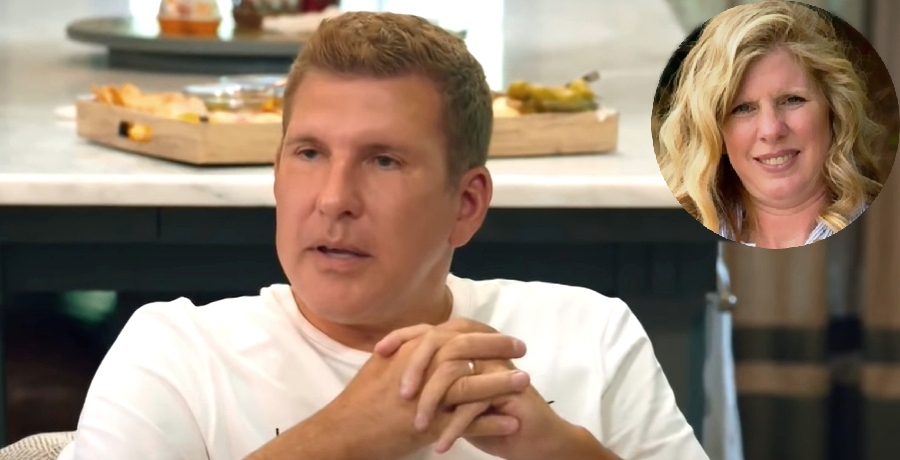 Chrisley Knows Best dad, Todd Chrisley wed Julie in May of 1996. Together they have three kids: Chase, Savannah, and Grayson. They all appear on the USA Network show regularly. Along with Todd’s mother, Nanny Faye. Notably, Todd has two other children, Lindsie and Kyle, from his first marriage with Teresa Terry.

From The List report, it seems that the relationship between Todd and Teresa is a stereotypical high school sweethearts scenario. The couple met in high school, and shortly after, Terry had their first child, Lindsie. Just two years later, Todd’s oldest son, Kyle was born in 1991.

After seven years, things get messy for the couple

Todd Chrisley was married to his first wife for seven years. Unfortunately, it wasn’t all wedded bliss. Things between the pair seem toxic. At one point Terry alleges a “campaign of mental and physical abuse.” Sadly, she further alleges some terrifying things against Todd. According to court documents Daily Mail acquires, there is mention of “battering,” “closed fist,” and “wielded a knife threatening to kill her”.

However, after they split, Lindsie and Kyle primarily lived with Todd. And eventually, Julie goes on to adopt Lindsie. Ultimately, that means Todd’s first wife gave up legal rights to Lindsie. It’s uncertain if that is the case for Kyle. According to an interview Terry gave Daily Mail she implies that Todd kept the kids because “he could provide more materially.”

Things seemed normal in the past

But things weren’t always tense between Todd Chrisley and his first wife. Daily Mail shares details about what life was like for Todd and Teresa Terry. Terry details their relationship in the beginning. “It was all very Southern, very laid back, eating meals with family, that sort of thing,” shares Terry. She goes on to say, “Todd and I would go to the movies, hangout. He was never one for big crowds.”

In the same interview, Teresa Terry seemingly explains how Todd is a different breed. “He always belonged somewhere else. He carried himself different,” shares his first wife. And this is different from how things were in high school for the duo. “He always wanted to wear the latest fashions, most of the people we went to school with were happy to wear T-shirts and jeans,” says Terry. And it should be no surprise to Chrisley Knows Best fans where Todd wanted to get his clothes from. “He wanted to get his clothes at Neiman Marcus.”

There’s been some recent drama between the exes

In past interviews, Teresa Terry doesn’t hold back when it comes to talking about Todd. She describes him as a micromanager and having to always be in control. “He’s so used to being controlling and vindictive that he doesn’t even see it anymore,” the ex-wife says. Shockingly Terry shares, “Most likely we wouldn’t have married if I hadn’t been pregnant but we did and it was a big deal.”

Todd Chrisley and his first wife have been divorced for 25 years, but unfortunately, that doesn’t mean there isn’t drama between the former lovers. During the 2019 Todd and Julie Chrisley tax evasion scandal, Kyle makes some serious allegations. According to Yahoo! Kyle Chrisley takes to his Facebook at the time of the tax evasion issue and shines a light on some supposed family secrets. Apparently, in this same post, he puts his mother on blast. Kyle claims that his mother, Todd’s first wife, is “responsible for Todd and Julie’s tax evasion drama.” He alleges that Terry reported Todd to the Georgia Department of Revenue.

However, in the end, it doesn’t seem like Teresa Terry would change her marriage to Todd Chrisley. She shares, “It’s been a wild ride, I’ll tell you that. But I don’t regret marrying Todd because I sure don’t regret my children.”

Did you know about Todd Chrisley and his first wife, Teresa Terry? Let us know the comment section below. Come back to TV Shows Ace for more news about Chrisley Knows Best.