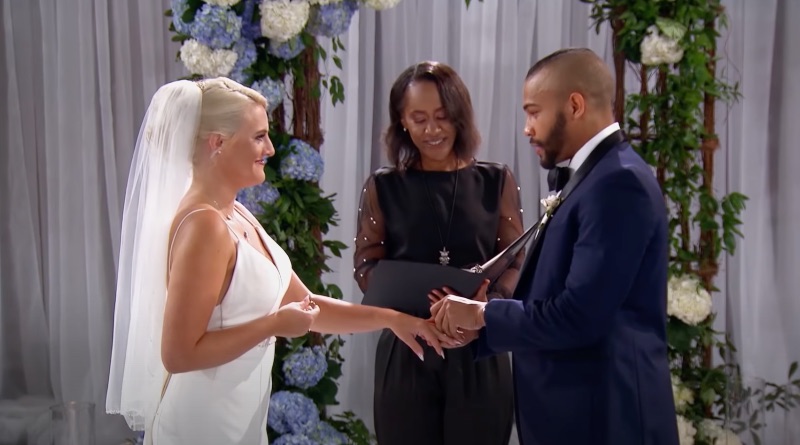 Married at First Sight spoilers for the rest of the season show trouble in paradise for Ryan Oubre and Clara Fergus. And it looks like the husband and wife are moving at two completely different speeds.

Initially, on this season of Married at First Sight, Ryan Oubre and Clara Fergus seemed to hit it off. As soon as they were cast, they drew a lot of attention as the first interracial couple in franchise history. So that alone stirred up a lot of interest in the pair. Meanwhile, the physical chemistry was there early as well. But whether that’s enough to make a marriage last is certainly a question worth asking.

The couple certainly seemed to build off of that initial chemistry. But teasers for the rest of the Lifetime season in Atlanta show that it isn’t all smooth sailing for the pair.

Are Ryan & Clara Too Different?

The adage that opposites attract may work for some people. But in Clara Fergus and Ryan Oubre’s case, those differences start to wear on the couple in Married at First Sight teasers. Overall, Ryan is much more reserved. Meanwhile, his wife is an extroverted party girl. And from the looks of it, this creates some friction in their marriage.

Meanwhile, based on Married at First Sight teasers, Ryan Oubre is slower to open up emotionally than Clara Fergus would like. Ryan talks in clips about not telling his new wife that he loves her. And that could potentially be a deal-breaker for their marriage. Clara says point-blank that if he doesn’t tell her he loves her by the six-month mark, she is “probably leaving.”

Clara on married at first sight wearing call her daddy merch on the first morning with her new husband is…..a choice

Can Married at First Sight Pair Overcome Their Obstacles?

Which couples stay together and which couples call it quits is a major part of every Married at First Sight season. When Decision Day comes, each pair has to make a decision that will impact the course of their lives forever. Meanwhile, it’s clear based on season teasers that Clara Fergus and Ryan Oubre still have a lot to work through in their marriage.

Moreover, Clara says she pleases her husband every night in the bedroom as well. Yet, according to what she says in spoiler clips, he doesn’t seem to reciprocate in the way that she wants. So there could be a major imbalance physically and emotionally for the duo.

Certainly, it’s worth watching the Married at First Sight season to see if they can iron out their issues. And whether they can make it as a pair – and make their marriage last long-term as the rest of the season unfolds.