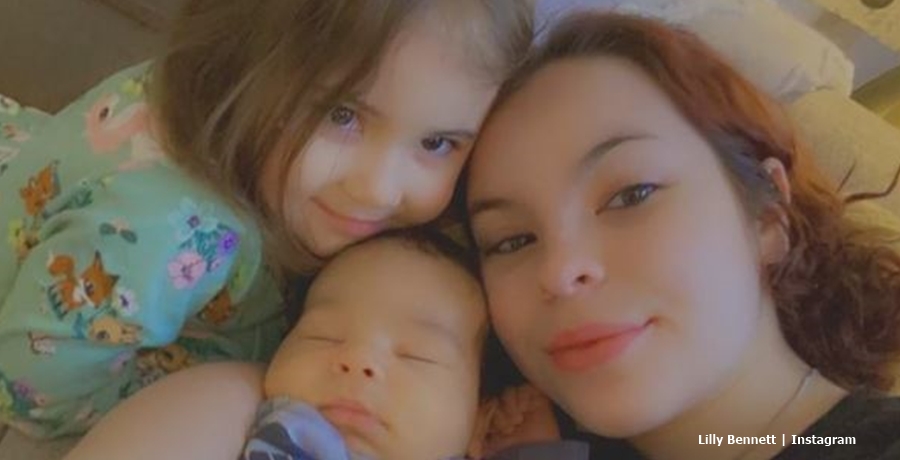 Unexpected star Lilly Bennett took to Instagram and shared some bad news. Many fans didn’t know about her problem. So, they felt sad. But Lilly managed to produce two really cute kids. One of them, Aaliyah, was the product of her relationship with James Kennedy. And the second child, Lawrence Charles Bishop IV arrived in November last year. His dad, Lawrence Bishop’s the guy that fans saw in the latest season of the TLC show.

We reported on December 14, that Lilly Bennett returns to Unexpected. Fans saw her with her new boyfriend Lawrence who seems like a pleasant sort of guy. She already shared photos of their baby boy ahead of the season. So maybe TLC didn’t hold her to any NDA on that. It seemed nice that his big sister by James Kennedy seemed delighted with her baby brother. Lawrence Charles Bishop IV arrived at 1:51 PM on Saturday, November 21.

In case you wonder about James Kennedy, Lilly Bennett’s boyfriend from Season 1 of Unexpected, he still keeps tabs on his daughter. According to Screenrant, he keeps his Instagram private but shares some photos of his daughter Aaliyah. Recall, he seemed very reluctant about being a teenage dad. But perhaps it’s best they never married so young, as it never worked out for them. But now fans feel so happy that Lilly Bennett had Aaliyah and then Charles, as she shared some bad news this week.

What’s the bad news about Lilly?

The Unexpected fan page on Instagram, @tcl.unexpectedtea, shared a post by Lilly from her TikTok. In it, she talked about “surgery for ovarian cysts.” Then, she also mentioned that doctors told her that her “ovarian tubes” seemingly die off. So, she might not carry any more kids. Naturally, TLC fans felt sad for her. One of them wrote, “Aww I didn’t know that I’m glad she was blessed with 2 babies❤️.”

But other Unexpected fans assured Lilly Bennett that it’s not necessarily the end of producing children. One of them commented, “That’s how I did not have 2 kids😂.” And another one diagnosed with “Endo” and “cysts every cycle,” also said they heard the same thing. However, successful pregnancies came along later.

Others talked about the bad news about ovarian cysts being wrong. One of them noted, “They told me I couldn’t get pregnant and if I did I wouldn’t carry past viability. I just had my Rainbow baby girl a month ago on Thursday. They lied to meeeeee.” And one fan talked about their sister who birthed four children.

So, while it sounds like bad news for Unexpected star Lilly Bennett, possibly one day, another baby on the way might still surprise her.