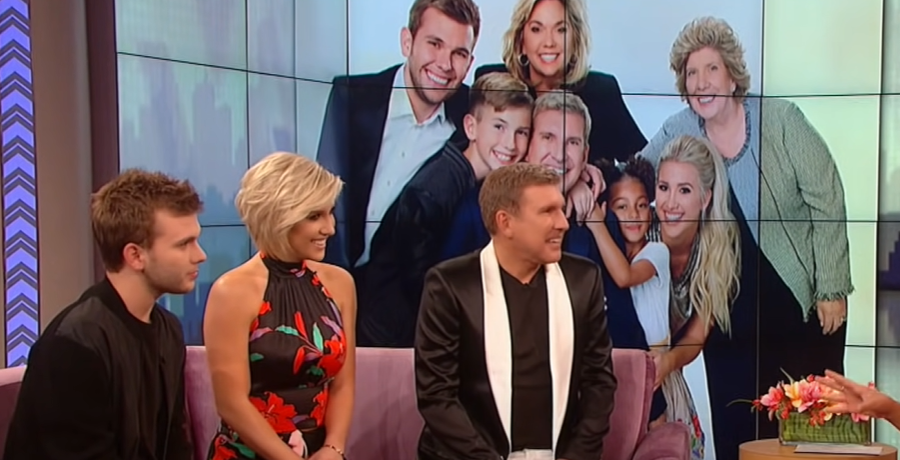 Wait, does Todd Chrisley actually have a favorite child?

As usual, fans love to stir things up on social media. This is especially true on Todd Chrisley’s platforms. Someone asked him who his favorite child is and he shared some pictures in his stories. In the most recent episode, before Savannah showed up to lunch, Todd told Chase he liked that he was on time better than her. When she arrived he fawned over her purse and revealed it had been a gift from him. They then ripped on Chase and his terrible gift-giving skills.

Todd often jokes with his kids about which of them is the favorite. He has six total including his granddaughter Chloe who he and Julie have full custody of. His two older children Lindsie Chrisley and Kyle Chrisley are not on the show. Chase, Savannah, and Grayson Chrisley are on the show along with Chloe.

Despite making fun of them, Todd is very proud of his children and it comes from a place of love. From the beginning of the show, fans knew he controlled a lot of what his children did, but he wanted to make sure they grew up to make good choices.

Why Do Fans Think Todd Chrisley Picked A Favorite?

The reason Todd Chrisley and Chrisley Knows Best fans think he picked a favorite is because of his recent Instagram Story. He posted pictures of Savannah and Chase seen above. He cropped Chase out and just had Savannah smiling at him. Fans think this is proof he is picking a favorite child. And they think that favorite is his twenty-three year old Savannah Chrisley.

Whether he has a favorite or not, fans love the way he’s raising his kids. One Twitter user said, “I really like how well Savannah and Chase have a big hand in helping Grayson grow up; they are incredible older siblings. You are truly blessed! They are very good young adults.”

The Reality Star Doesn’t Back Down From Trolls

Todd Chrisley’s most recent post said, “the devil wouldn’t be attacking you so hard if there wasn’t something valuable inside of you. Thieves don’t break into empty houses. Read that again.” He captioned it, read that, feel that, believe that.” You don’t come for his family and you certainly don’t come for his kids. Todd is the first one in the family to clap back.

Some fans think it’s obvious Savannah is his favorite. He likes to dress her and hang out with her the most. Others argue relationship with all his kids is similar and just expressed in different ways. What do you think about Todd’s picture of Chase and Savannah? Do you think he meant to cut Chase out of it? Comment with your thoughts below.