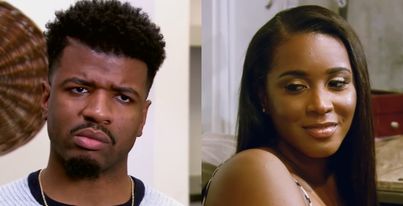 Chris Williams confirms via Instagram that his ex-fiancee, Mercedes, suffered a miscarriage back in October.  Married at First Sight fans were shocked when rumors began circulating that Chris Williams was expecting a baby with his ex-fiancee. The timing of the pregnancy announcement coinciding with his honeymoon caused major drama on the show. After rumors began circulating about the actuality of her pregnancy, Chris has decided to put the rumors to rest.

Chris Williams Responds To The Miscarriage

Chris tells fans, “August 2020 I found out some of the greatest news I had heard ever. I would be a dad. I wanted to be the best Dad I could be. It was the most confusing period that I had ever experienced. My family was happy because there was going to be an addition to our family. Well during the latter part of October Mercedes would complain about stomach pains that gradually got worse.”

Chris goes on to detail the process of getting Mercedes to the hospital and the discovery of the loss. “On 10/28/2020 we rushed her to the hospital. Because I wasn’t the husband I couldn’t go to the room due to Covid, but after a time I managed to get to the back. When I got there I was met with cold silence. I found out that she had a miscarriage! I had never been through this before so I didn’t know what feelings were normal and what was abnormal all I know is it felt like a funeral.”

Due to a lot of skepticism, Chris continues to say he can provide proof to fans who are doubting the truth. “I wrestled with posting this, but this is real life. Not that an explanation is owed, but we do have MyChart documents that detail the day the pregnancy results came back from the doctor on 8/31/2020 and all paperwork regarding the miscarriage on 10/28/2020.”

Fans Respond With Support…And Some With Hate

Fans flooded his comments with sympathy and their condolences. Some even expressing they understand what he is going through due to similar experiences. Unfortunately, he is receiving an unnecessary amount of hate. One person commenting, “You & Mercedes is such liars! I hope your world continues to crumble!”

Chris is responding by reposting positive and negative comments alike on his Instagram story. He’s even going as far as deleting inappropriate comments to protect his and Mercedes’ peace. He continues to be supportive to Mercedes publicly on Instagram, acknowledging that she is demonstrating “the strength and fortitude to get through this.” While they have nothing to prove, Chris is doing his best to halt other hurtful rumors. Condolences to the two of them.