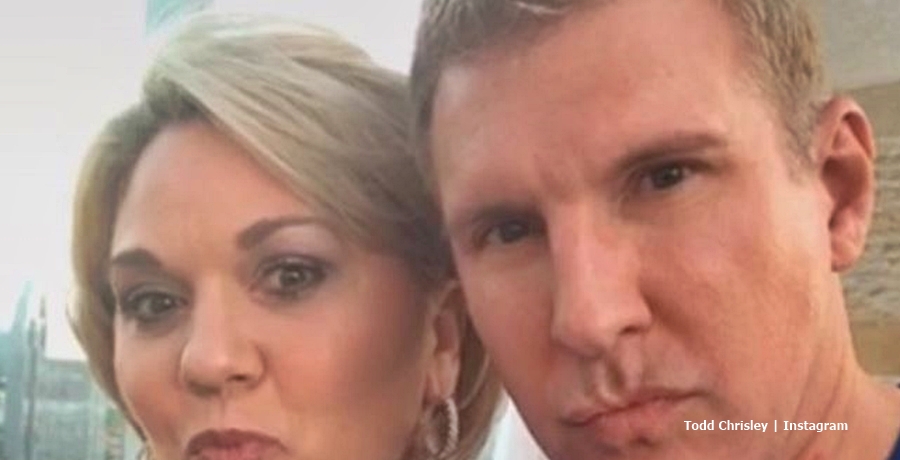 Todd Chrisley shares funny posts, cutting posts, and on weekends, sometimes inspirational memes. His followers love all of them. But, they particularly like the inspirational ones that give them hope, or courage during adversity. This weekend he posted up an inspirational one that his Christian followers enjoyed. But anyone facing a dark time might take something away from it.

The patriarch of Chrisley Knows Best racked up a huge admiring following. They love him for his funny scenes on the USA Network show. But he’s not immune from critics. Recently, fans dragged him for using too much botox. Well if nothing else, he’s always candid about using it. And in one scene fans saw him persuade Nanny Faye into reluctantly going for the same treatment. Over Valentine’s, some fans slammed him for his puckered “duck lips.” However, sometimes Julie’s husband likes the digs and pokes at him. It brings the opportunity to ruthlessly slap down any trolls.

Other fans delve deep into the lives of Todd Chrisley and his kids, Savannah and Chase. Some critics think he interferes with their relationship too much. And while he claims he only heard about Nic Kerdiles and Savannah splitting when fans did, some fans disbelieve him. When he hinted at a friendly relationship with Nic, fans wondered if he secretly hopes Savannah takes up ger relationship with Nic again. But throughout, he regularly shares his inspirational quotes and even critics can take something useful away from them.

The quote that Todd Chrisley shared on Saturday, March 6 came from a popular meme. It’s not like he’s a deep reader or anything like that. But Todd obviously finds memes and thinks of fans if he feels they might help them. The card he shared said, “The devil wouldn’t be attacking you so hard if there wasn’t something valuable inside of you. Thieves don’t break into empty houses. Read that again.”

As Todd Chrisley is a self-confessed Christian, many people loved the saying. After all, 2020 plain hit the bottom rung for good news. And 2021 seems only one notch higher in the popularity stakes. The Bible talks about the Devil as a “roaring lion.” Well, Christians can take courage from the quote because no matter how attacked they feel, they have a deep faith to hang onto. And plenty of articles exist on the Internet about thieves who steal both physically and emotionally.

So a lot of people thanked Todd Chrisley for reminding them of the inspirational quote. And non-Christians can also relate to moral values and principles when they feel persecuted or misunderstood. So, Todd picked up loads of clapping hands and loving heart emojis.

‘RHOC’: Vicki Gunvalson Addresses Steve Lodge Split To Jeana Keough
‘Sister Wives’ Kody Brown Consults Multiple Doctors
Lindsay Arnold Dishes On Her Plans To Return To ‘Dancing With The Stars’
‘The Bold And The Beautiful’ Spoilers Week Of April 19: The Cops Close In On Liam
Jeremy & Jinger Vuolo Fans Want The ‘Real’ ‘Counting On’ Couple Back