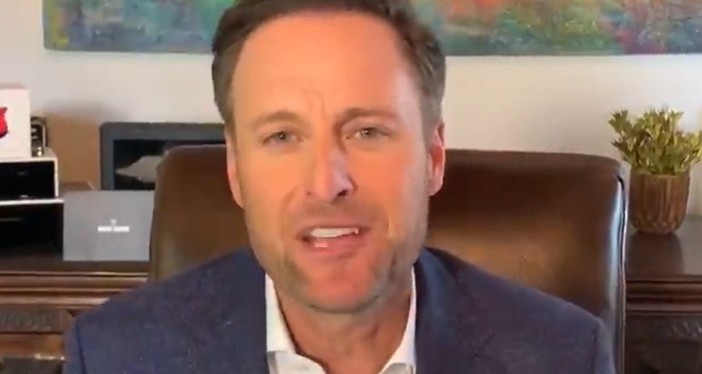 What should have been an apology and a move towards getting things back to normal, turned into more jabs for Chris Harrison. The longtime host of The Bachelor went on Good Morning America to apologize for his words that caused hurt among many in the Black and BIPOC communities. Many Bachelor alums were appalled by his interview with former Bachelorette Rachel Lindsay. In fact, calls for him to be fired completely surfaced. Now, in a chance to begin redeeming himself, Michael Strahan flipped things around and made him look bad following his interview being aired on ABC.

OK! shared an exclusive look at how Chris Harrison feels following Michael Strahan’s harsh words after his interview aired. A source close to the situation shared with OK! that Chris felt blindsided by the edit his interview received. And, he was not happy with Strahan’s reaction to his apology after it aired.

Chris believed doing his first comeback interview on ABC would be a great choice since it’s the same network that airs The Bachelor. Little did he know Strahan would take what he said and act very unimpressed with his sincere apology. It’s almost as if he was set up for failure.

According to the source, “Chris wanted to fly from L.A. to New York to appear live on Good Morning America. But instead was told it would be better to pre-tape his segment from L.A. because of COVID-19 precautions. Rather than pre-tape from home, Chris went to an approved ABC studio where he sat in front of a green screen with the ‘at-home’ background artificially added.”

The source continued saying, “Before Chris said a word he looked like a phony. But after the awkward visual, Chris actually thought the interview went well. Little did he know how the piece would be edited.”

Strahan’s words following the interview were harsh. He said, “His apology is his apology, but it felt like I got nothing more than a surface response on any of this.” Strahan continued saying Chris is “obviously a man who wants to clearly stay on the show, but only time will tell if there’s any meaning behind his words.”

The source close to Chris said, “Chris feels ambushed. If Michael Strahan is questioning his motives, what chance does he have convincing everyone that he is sincere? Chris is hurt and angry.”

Embattled host of #TheBachelor, Chris Harrison, speaks out for the first time since stepping aside from the franchise last month amid racism scandal: "I am an imperfect man, I made a mistake and I own that." https://t.co/OfPBBzXO10 pic.twitter.com/aHQvpBqjst

What started the controversy?

The controversy surrounding Chris Harrison began when he asked fans to show a little grace to Bachelor contestant Rachael Kirkconnell. He told Rachel Lindsay that the world looked through a different lens in 2018 than in 2021. Of course, these statements surfaced in regards to Rachael Kirkconnell attending an Old South Antebellum party. At the time he said it was college kids having fun.

However, Chris apologized saying he was wrong. He admitted there is never a good time for an Antebellum party. Rachael Kirkconnell also issued apologies for her past racist actions. Both she and Chris vowed to get educated and do better in the future by understanding how hurtful words and actions can be.

Right now nothing has been announced regarding Chris Harrison’s future with the franchise. Emmanuel Acho was named the host for After the Final Rose.

Todd Chrisley Calls Chase ‘Stupid F*ck’ In Rare Outburst – Hear The Shocking Footage
‘My 600-Lb. Life’ Star Melissa Marescot Gives Exclusive Interview Update
Chrishell Stause Vacations In Paradise With Her New Man — Who Is It?
Todd Chrisley Reaching Out To His Hurt Child, Which One?
Paris Hilton Joining ‘RHOBH’ Would Be ‘Hunky Dory’ With Fans, But Will She? Kathy Spills All