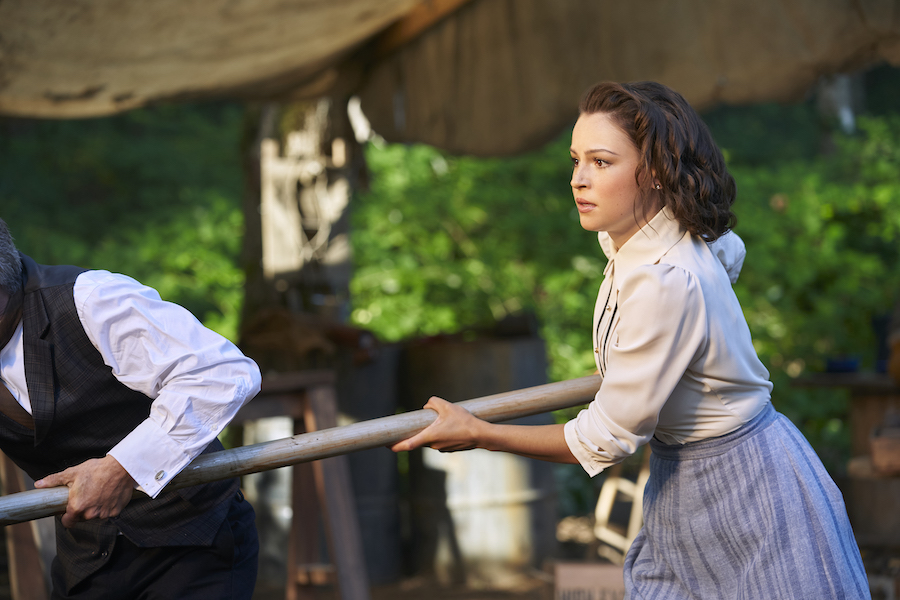 In the upcoming When Calls The Heart episode, “From The Ashes,” there is a lot of change happening. A crisis brings the Hope Valley residents an opportunity to work together.

Elizabeth also finds her love life in a bit of a crisis. You could say that it all could explode if not handled carefully.

What does the WCTH extended preview show?

When Calls The Heart Season 8, Episode 3 ‘From The Ashes’ Extended Preview

In Hallmark’s When Calls The Heart Season 8 Episode 3, “From The Ashes” extended preview, we see a lot of action. In the preview, fans see an explosion and huge fire. This is an oil rig, and it could endanger the people of Hope Valley.

The episode starts out with Helen Bouchard grilling Elizabeth Thornton about her feelings for Lucas and that other guy. “You must have some idea of your affections for Constable Grant.” However, Elizabeth’s answer may not be necessary. There is a huge explosion, and it is in the direction of the oil rig. Where Lucas was working.

Helen and Elizabeth rush outside. Helen wants to run towards the fire. Is Lucas safe? Was he killed? Elizabeth holds her back. But, it is clear she is quite upset about this situation.

Now, the residents of Hope Valley are working together. They only want the guys to go out and deal with the fire. But, they need one more person. Fiona asks, “Does it have to be a man?”

In When Calls The Heart, Hope Valley Residents Bond Together To Put Out Fire

When Calls The Heart can be harrowing, and in “From The Ashes,” the stakes cannot be higher. The fire is going to be strong. They need to be careful and be quick. This is very dangerous and could destroy this idyllic town.

In addition, in this episode, Nathan is summoned for an inquiry by a Mountie from his past. What also looks quite fun is that Jesse digs Lee’s motorcycle.

In this When Calls The Heart extended episode, there is a sneak peek. It shows Elizabeth walking with Rosemary. Elizabeth tells her friend that “I know I made the right choice to not be with Nathan.” However, she now has to discuss the other guy. Does her rejection of Nathan mean that she wants Lucas?

Not so fast. Because Elizabeth says that her decision on Nathan does not “mean I made the choice to be with Lucas.” Rosemary asked her if she has seen Lucas since she rejected Nathan. She has not. That is because she is waiting for Helen to tell her son that his father left her.

This is a very dramatic situation, and plain-speaking Rosemary points it out. “That really is a terrible spot she put you in.” Moreover, Elizabeth points out that Lucas has always considered his parent’s marriage a “fairy tale.” She is clearly bracing herself for some emotion. What will happen when Lucas finds out?

And speaking of the man of the hour, Lucas comes out with a stack of books. They are for the library. Elizabeth excuses herself and runs off. When will she talk to Lucas?

When Can You Watch When Calls The Heart?

Don’t forget to catch the latest episode of When Calls The Heart Season 8, on Sunday, March 7, at 9 p.m., on the Hallmark Channel.