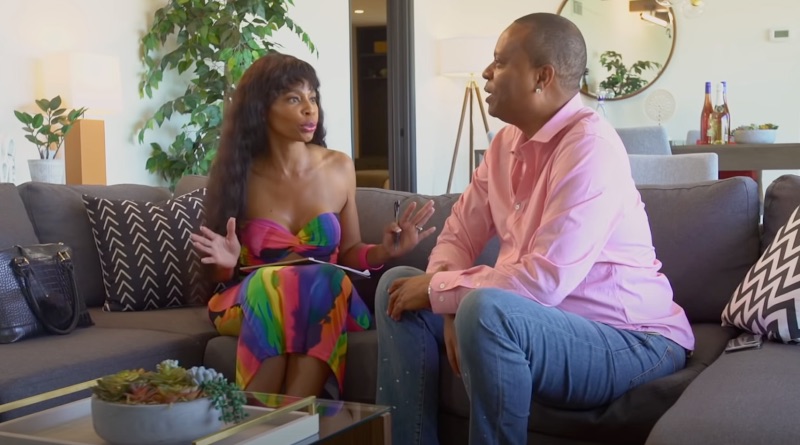 Marrying Millions is back for the second half of Season 2 – and many viewers wonder about the relationship status of Rodney Foster and Desiry Hall. Are the pair still together?

As one of the more controversial Marrying Millions couples, Rodney Foster and Desiry Hall have been quiet of late. Even though their financial situations may be drastically different, they seemed to hit it off on the Lifetime show.

But this union of theirs is not without drama on Marrying Millions. Distance was an issue for them – with Rodney outside of Washington, DC, and Desiry in Los Angeles. So there are concerns over whether their relationship can last – especially because of the distance between them. Meanwhile, there’s also the fact that they decided to keep their relationship hidden. And that’s just the tip of the iceberg when it comes to the drama they deal with in current episodes.

Marriage Situation Heats Up for the Pair

Meanwhile, there’s a lot of marriage drama in current Marrying Millions episodes. As watchers saw, Desiry Hall is excited about wedding venues. But things took a turn when Rodney Foster brought up the possibility of a prenup. As a multi-millionaire and successful business owner, Rodney has a lot to lose if things go south. Meanwhile, Desiry Hall isn’t happy about the prenup bombshell.

In Rodney’s mind, this is what’s best for him. He has a lot to lose if things go south. Even so, Desiry Hall believes going this route is a sign of “distrust.” She believes that if Rodney stays faithful, there’s no need for this type of agreement. This is especially true because he was unfaithful in the past. Either way, it drives a wedge between them and adds drama to their Marrying Millions storyline.

In addition to all of this marriage drama, there are questions about Rodney Foster’s orientation. Many viewers believe he prefers men over women. The fact that he kept his relationship with Desiry Hall a secret after two years together is a major red flag for a lot of Marrying Millions watchers. So there’s a lot going on between these two.

Are Marrying Millions Couple Still Together?

Despite all the Marrying Millions drama in current episodes, it looks like Rodney Foster and Desiry Hall are still an item. If they manage to make it as a couple for the long haul, it’s clear they still have a lot of issues to work through. And one of the biggest issues is trust – especially after Rodney cheated.

Meanwhile, it’s worth seeing what happens in current episodes with all the marriage drama they deal with. Still, at least for now, it looks like they’re an item.

Jedidiah Duggar & Katey Nakatsu Share Special Update & Cute Photos
Vernon Davis Discusses Biggest Hurdles On ‘Dancing With The Stars’
Is This A Sign ‘Bringing Up Bates’ Will Be Canceled?
Jeremy Vuolo Goes Back To College & Back To His Roots
Downward Spiral?! TLC Fans Worry Tammy Slaton Might Be Suicidal