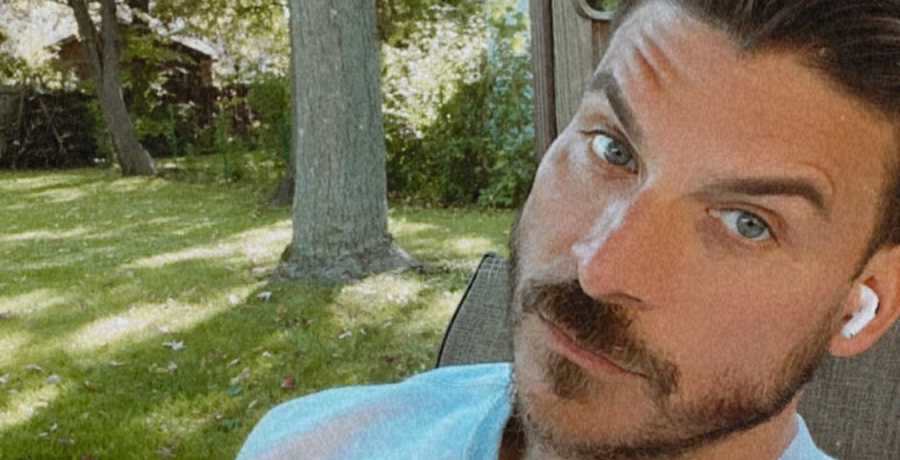 Vanderpump Rules alum Jax Taylor confused fans. On Monday, March 1, he took to Twitter to share a photo from a movie set. The former Bravo star wore a pair of denim overalls with a baseball cap, brown T-shirt, and workboots. To his left is a chair that has Robert De Niro’s name on it.

Of course, this photo caused a frenzy. Fans wanted to know what Jax was doing on the movie set. Then, the reality star teased that he and his wife, Brittany Cartwright, would make a return to TV. But, he could end up on the big screen instead.

Jax Taylor “at work” in a new movie?

On Monday, Jax Taylor shared the photo with his fans. He wrote: “Not a bad day at work.” This seems to hint that he’s appearing in a new film. Fans are confused by Jax’s photo. Of course, they wanted to know what he was doing with Robert De Niro. Here are just some of the comments:

He revealed that he’s “producing acting!” Jax told his fans to “stay tuned” for updates on his new project. But fans aren’t convinced. They want to know what he’s really doing there.

Bravo by Betches reposted the photo on Instagram. They wrote in the caption: “is Jax…. working… with Robert De Niro???” Their followers wanted to know as well. One noted that Lala Kent’s fiance Randall Emmett could’ve given Jax a movie role. They wrote that “this is the set Randy [Emmett] is working on.” However, that fan thinks Jax is there to help serve coffee.

Another added: “Rand just giving everyone a chance.” A third fan wrote: “Ok Jax. Please give Randall his chair back.” Some people don’t believe that Jax was given an acting role. They want to know who really owns that casting chair.

Not a bad day at work 🎥🎬📺 pic.twitter.com/8N9WHTMAHq

“I think he’s working as an extra and thus was a photo op,” one user commented. “Jax may be a lot of things but I don’t see him wearing overalls as a choice. Especially with the one strap like we’re in the 90s.”

Of course, fans don’t trust Jax since he loves to lie. He didn’t give many details. So, he could just be an extra in the film. Maybe he wants to try something new after being on reality television for so long.

Vanderpump Rules alum thinks he was given a bad edit

Jax Taylor announced that he quit Pump Rules in 2020. Now, he’s reflecting back on his time on the show. He feels that he got a bad edit. In a new interview, he blamed the Bravo producers for not allowing him to grow up.

“They did a good job making me look bad. One year, they thought I was gay, the next year I was homophobic… They were throwing things at me and it hurt my feelings,” Jax told Reality Blurb. “Things were getting [scripted] and they were getting frustrated with me because I was declining to do things.”

Jax claims the producers wanted him to return to SUR and act the same way he did in the first season. In addition, he blames them for not allowing him to grow up. When he wanted to show his growth, “they didn’t want to film it because it was boring.” Jax claims he matured and isn’t the person he was when the show started.

In the final scene of Season 8 of Vanderpump Rules, Jax had a heated exchange with Lisa Vanderpump. He told her that the reality series was his show. However, in the interview, Jax claims he’s not as interested in the show as he used to be.

“The last three years of Vanderpump Rules, I was 90 percent checked out,” he reveals.

Then, Jax continues to say “I couldn’t go on faking it. I have no interest in any of the things they are doing that show. I’m a dad. I’m 40-years-old. It didn’t make sense for me to pretend to work at SUR.”