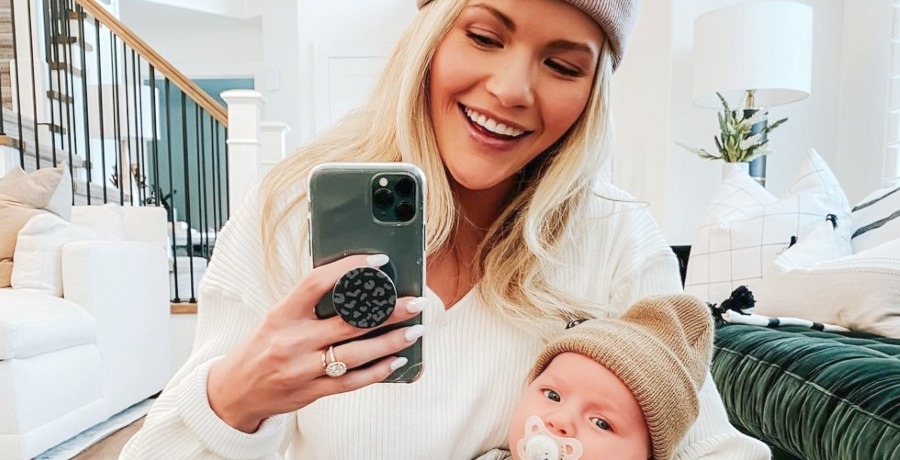 One fan asked if Witney had COVID-19 yet.

“So I’ve debated sharing this or not… but yes we did have Covid when Leo was born. We gave it to my parents on Christmas Eve. They weren’t out of quarantine yet & had to meet their grandson for the first time through a window. Literally broke my heart into pieces,” the dancer shared in her story.

In addition to having COVID-19, Leo was stuck under Witney’s pelvis. She had to have an emergency C-section in order to save her baby boy. But everything is fine now. Witney and Leo are both recovering well at home. She’s even training in hopes of returning to Dancing With The Stars this year.

Raising a newborn can be a lot of work. Thankfully, Witney Carson gets lots of help from her husband, Carson McAllister. During the Instagram live session, many fans asked about Witney’s husband and said he seemed like a great dad. Witney happily replied that he is.

It’s nice to have Carson’s help, but Witney also revealed she suffers from mommy guilt a lot. She says it’s one of the things that surprised her the most about motherhood.

“I think the mom guilt has hit me harder than I thought. If anything goes wrong I tend to blame myself which I know is irrational & not true.. I’m working on it!!”

In another frame from the Instagram Live session, Witney revealed she pushed herself too hard during a training session. She injured herself and said it even hurts to pick up Leo now.

Fans hope that she is able to recover quickly and get back to dancing once again. They definitely understood why she took Season 29 off, but really hope Witney will be a part of Season 30.

Us Weekly asked the Season 19 champion if she planned to return to the series.

“That’s the goal,” Witney answered. “That’s what I’m working toward. … So if anything changes, we’ll just go with it, but that is in our sights for right now.”

Witney Carson may return to the competition this fall, but fans could expect to see her sit out once again in future seasons. She also revealed in the Instagram live session that she and her husband want several children and love the idea of a big family.

Are you hoping to see Witney return this year? Let us know what you think in the comments.