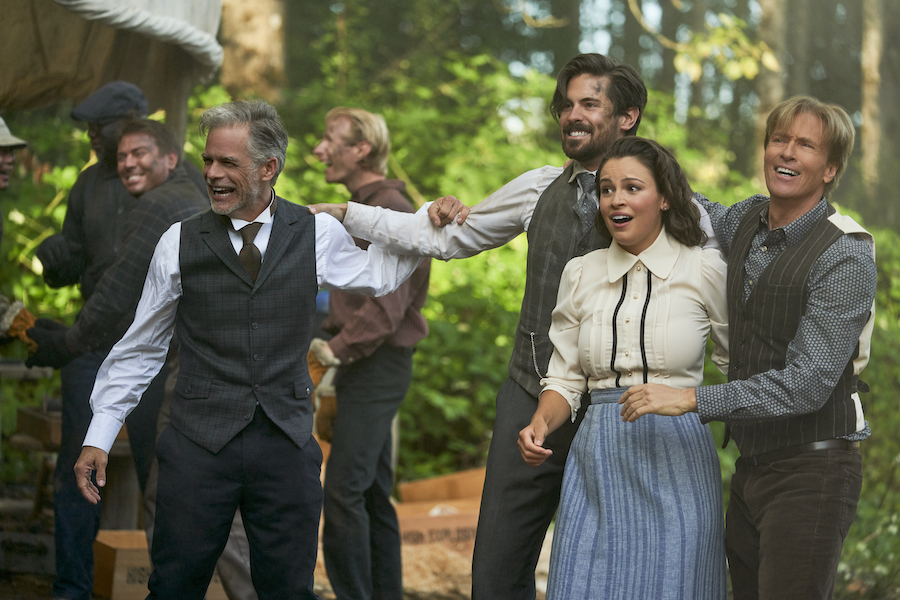 In the upcoming When Calls The Heart episode, “From The Ashes,” the folks in Hope Valley are dealing with a blast. How does this crisis bring the town together? Moreover, has Elizabeth chosen her man? After last week’s explosive ending, fans are expecting some sort of decision.

Or is the Hallmark series just making fans deal with a literal explosion, that mirrors last week’s bombshell?

When Calls The Heart Season 8, Episode 3 ‘From The Ashes’ Preview

Hallmark’s When Calls The Heart Season 8 has been full of bombshells, but nothing like the third episode, entitled “From The Ashes.” In the preview,  fans see an explosion and huge fire. This is an oil rig, and it could endanger the people of Hope Valley.

Now, they need to gather together to put out the fire. They need to be careful and be quick. This is very dangerous and could destroy this tranquil town. In addition, in this episode, Nathan is summoned for an inquiry by a Mountie from his past. What also looks quite fun is that Jesse digs Lee’s motorcycle.

Meanwhile, Elizabeth’s tranquility is a bit shattered as Helen Bouchard starts to ask her about Nathan, and leading her own son on. Could Elizabeth’s editor influence her decision. Moreover, will she make that decision soon?

Will Elizabeth Make Her Choice In This Episode?

Hearties who are desperate to know whether Elizabeth will go the way of good-looking, but shy Mountie, Nathan Grant or suave and debonair saloon owner, Lucas Bouchard. Could this episode of When Calls The Heart reveal who she chooses?

On one hand, the last episode, “Honestly, Elizabeth,” left fans in a total shock. When Nathan made his confession of love, he spoke from the heart. However, Elizabeth seems unsure.

However, we know that she is starting to move on from Jack. When baby Jack looked at his daddy’s photo, she had a tender moment with her son. But, she’s hardly ready to declare her love. Yet.

Although the WCTH producers promise that there will be a resolution to the love triangle, it will likely not be stuffed into an episode that is jam-packed with action, like this one. It will likely be the entire episode.

Moreover, Hallmark will certainly let fans know, this is when they need to watch. Elizabeth will soon choose between Nathan and Lucas. Unfortunately, there will be one hurt suitor and a lot of upset fans. Will the story help mend those hearts this season?

When Calls The Heart Is Number One Scripted Series In 2021

According to a recent Hallmark press release, When Calls The Heart became the number one most-watched original scripted series for women 18 years of age and older.

Now in Season 8, this show continues to go strong, entertaining fans and telling wonderful stories. This series is based on the Janette Oke novels.

Be sure to catch When Calls The Heart Season 8 on Sunday nights, at 9 p.m. Eastern, on the Hallmark Channel. In addition, live tweet and watch “From The Ashes,” with Hallmark and the cast, including Erin Krakow.