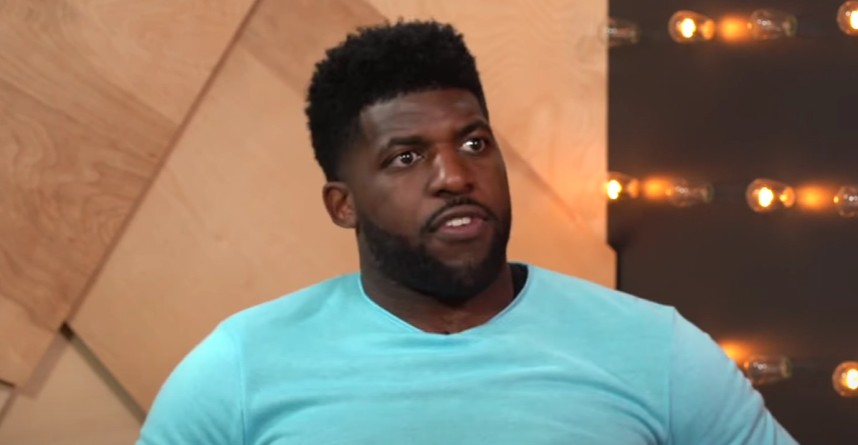 Bachelor Nation is facing some tough times as the racism controversy surrounding Rachael Kirkconnell and Chris Harrison continues. Chris stepped aside as host following his interview with Rachel Lindsay. Since stepping aside, production cast Emmanuel Acho to fill his shoes for Matt James’ After the Final Rose special. Many had heard Rachel say Emmanuel would be a good choice. However, there are many viewers who do not know much about him. So, here’s a look at Emmanuel and why he was an excellent choice for the franchise.

Everything to know about Emmanuel Acho

The announcement came Saturday that Emmanuel Acho would be hosting The Bachelor: After the Final Rose. The news comes after other possible replacements were discussed, such as Michael Strahan and Robin Rogers. Emmanuel remains Rachel’s top choice for the job. She was offered the role, but gracefully declined.

Emmanuel is a great choice to host the special which airs immediately following Matt James’ final rose ceremony. He wrote an important book that is gaining tons of attention. Emmanuel wrote the 2020 New York Times best seller, “Uncomfortable Conversations with a Black Man.” He describes it as “A book that answers all the racial questions you’ve been too afraid to ask.”

He holds a master’s degree from the University of Texas. Emmanuel said, “I played for 4 years in the NFL, and I currently host a sports show, @sfyonfs1.” He joined Fox Sports in 2020. He also co-hosts the afternoon show, Speak for Yourself.

Emmanuel also did medical missionary work in Africa in 2019.

More importantly, he wants to help make the world a better place. He said, “Lastly, I love being a bridge for reconciliation. Our world is disconnected & divided, my goal is to unify.”

Many feel Emmanuel can handle the tough conversations bound to happen. 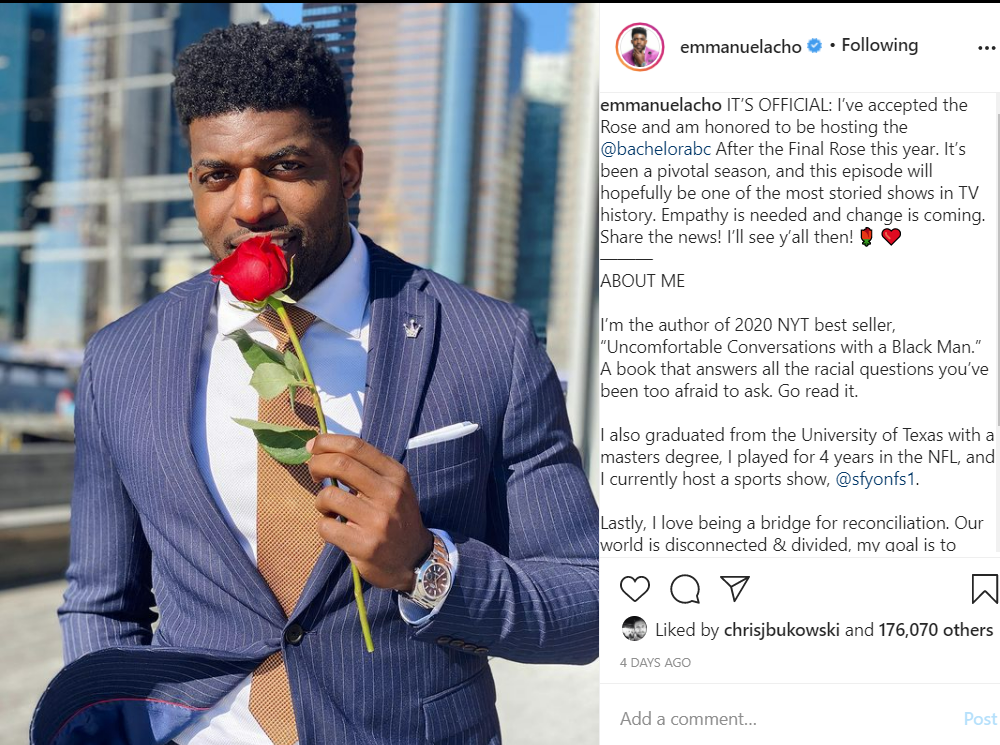 Not his first chance to be on The Bachelor franchise

Emmanuel also shared his hosting duties on After the Final Rose are not the first time he was asked to participate in the franchise. US Weekly shared Emmanuel was actually offered a chance to find love on the show. He said, “I got asked to go on The Bachelorette twice. [In] 2017 and then most recently after Uncomfortable Conversations [With a Black Man].”

So, why did he turn down the two offers? Emmanuel said, “I couldn’t be The Bachelor because I feel like people would judge me.” He continued, “Like, ‘You were just kissing her and now you’re kissing her? Why are you so grimy? I thought you were about uncomfortable conversations, not uncomfortable makeouts.’ I ain’t got no time for that. I’m like, let me just have my conversations. I don’t need no dream suites, no home visits.”

After the selection was official, Emmanuel shared the news on Instagram. He said, “IT’S OFFICIAL: I’ve accepted the Rose and am honored to be hosting the @bachelorabc After the Final Rose this year. It’s been a pivotal season, and this episode will hopefully be one of the most storied shows in TV history. Empathy is needed and change is coming. Share the news! I’ll see y’all then! 🌹 ❤️.”

Emmanuel is ready for the challenge

He told People this opportunity is huge for him. Emmanuel said, “This is huge for me in the work for racial reconciliation.” He continued, “Because it shows that in the midst of turmoil, racial turmoil, across one of America’s most watched shows over the last two decades, I’m seen as a thought generator.”

He feels it’s an incredible opportunity and a privilege to host the show.

The conversations airing March 15 will no doubt be tough. However, it’s something the franchise needs to work out to move forward.

More Lifetime Summer Of Secrets Movies That Start Memorial Day!
‘When Calls the Heart’ Preview: ‘A Parade and a Charade’
Wait, What?! Colton Underwood Getting Netflix Documentary??
Tori Roloff Of ‘LPBW’ Gets An Honest Question Most Fans Don’t Dare Ask
Khloe Kardashian Freaks Fans Out On Social Media