As Welcome to Plathville viewers know, Micah Plath is pursuing a modeling career. On the TLC show, some peeks into his career were featured. He seems to enjoy modeling, and fans think he seems to be good at it too. On the show, fans saw him learn about “pillow talk” and so much more as he left his parents’ strict home and entered the “real world.”

On social media, Micah often shares photos of himself modeling. He is shirtless in many of his modeling photos.

Sometimes, Micah’s social media posts are referred to as “thirst traps.” According to Dictionary.com, “A thirst trap is a sexy photo posted on social media to attract attention.”

In a new social media post, Micah shared a video of himself working out. He’s working out on the beach in just shorts and shoes. At one point in the video, he does throw on a tank top. The TLC star shares several clips from his workout routine, showing off his fit body. He simply captions his video, “Muscle beach.”

It’s unclear where exactly Micah is though. In the comments section, his followers are guessing where he may be. One thinks he’s in Florida, while another says California. One seems certain that he’s in Miami, Florida in South Beach. Since the Plath family lives in Georgia, this would make sense. 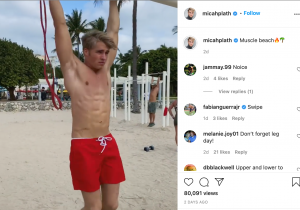 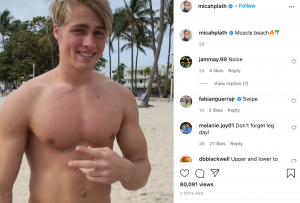 Naturally, this thirst trap is encouraging lots of Micah’s social media followers to leave comments on the video. Overall, Micah is getting a positive response from his followers. They seem to like the video, and naturally, some of them are obsessing over the 19-year-old’s fit body.

Someone commented, “wow i missed out today.” Someone else writes, “no disrespect to your girlfriend micah but I’m in love with you.” Other fans say he’s “so handsome” and that he makes working out “look easy.”

Fans are commenting heart emojis and flame emojis to show Micah they love him and that they think he’s hot.

A few fans are making suggestions for Micah’s fitness routine, reminding him not to skip leg day. One fan wants to know how much he’s benching too.

So, what do you think of Micah Plath’s new video? Let us know in the comments below.

For the latest on the Welcome to Plathville family, check back with TV Shows Ace.