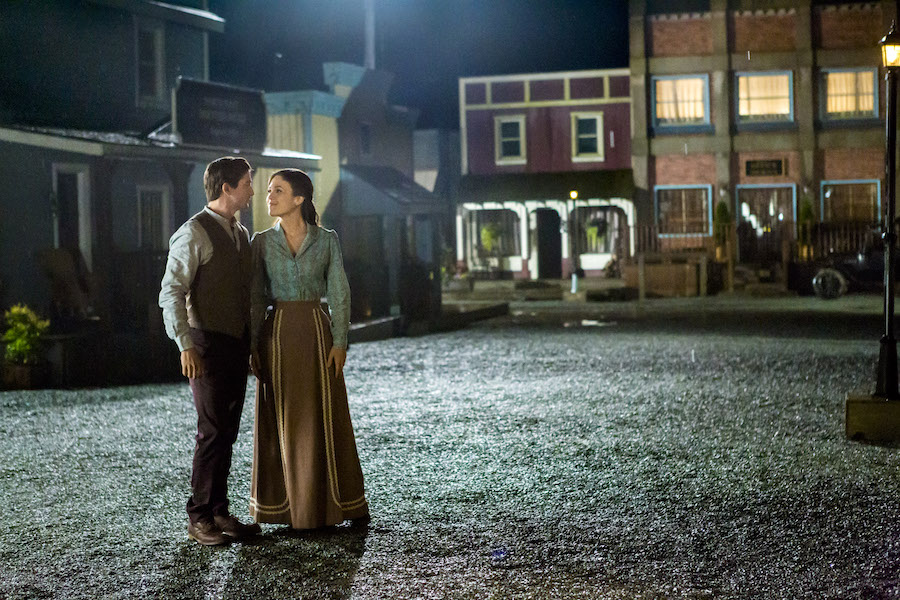 There has never been anything as painful or disrupting for Hearties as at the end of When Calls The Heart Season 5, when Jack Thornton was killed off the show. Since then, actor Daniel Lissing has discussed why he left the show. Even executive producer Brian Bird has shared the circumstances surrounding Daniel Lissing’s departure.

But, what about Erin Krakow? When did she find out when he was leaving?

For the first time, Hallmark fans get to hear her side of the story.

Just recently, When Calls The Heart star Erin Krakow was on the Deck The Hallmark podcast. She was promoting cable’s number one series, and her new movie with Tyler Hynes, It Was Always You.

After sharing the long process of auditioning for the part of Elizabeth Thatcher Thornton, the conversation went to her co-star, Daniel Lissing. The two had a lot of great chemistry. Erin admits that she “never realized” how much their chemistry would affect the Hearties.

Then, the big question, what did Erin think when Daniel Lissing told her that it was time to move on from When Calls The Heart? Podcast host Bran asked, “were you scared?” He even asked if she told Dan not to go. “What was it like for you” when he decided to “move on to other ventures.”

Erin became silent. Then she said, “Thanks for asking.” After some small, uncomfortable laughs, she did go on to share how she found out that he was leaving.

“When Dan came to me to share this news, it wasn’t ‘I’m thinking I’d like to explore other options.’ It was ‘I’ve gone to the network. I’m leaving'”

She further explained that “He wanted to tell me himself, which I appreciate.” Erin then added, “Because if I heard from somewhere else, he would have been in serious trouble!”

Her reaction? “Really, really sad.” Erin continued, “He had become such a partner in crime. Our working together just worked so well.” She then added, “It was easy.”

Don’t let the day end without listening to our interview with @erinkrakow! We had a blast & asked the hard hitting questions like this one. Listen wherever or watch on @frndlytv!
🎧: https://t.co/Zx9cwyUktX
📺: https://t.co/1NnDLiC14h#Hearties #WhenCallsTheHeart @hallmarkchannel pic.twitter.com/JP56XUSixi

Erin Krakow Had Fears For Future Of WCTH

After Daniel Lissing told Erin Krakow that he was leaving When Calls The Heart, she admitted that she was “a little nervous” for the show. She said that is because she “cared deeply” for the show. Most of all, she was concerned for all the people “whose livelihoods are wrapped up in it.”

She admits that she was “sure” there were moments that she wondered, “What does this mean for all of these people? Are we going to still have jobs?” She even wondered if Hallmark would let the show go on and if they would continue to have this great success “without Daniel.”

She does believe that Hallmark did set their mind at ease. This did not mean the end for the show.

When Calls The Heart Season 8 airs on Sunday nights at 9 p.m. Eastern, on the Hallmark Channel.

‘Days of Our Lives’: Renewed Or Canceled?
Why Is ‘Seeking Sister Wife’ Roberta Emotional About Her Father?
Peter Weber Starting A Podcast & Writing A Children’s Book, What?
‘American Idol’ Beane Hepler Gushes Over His Boyfriend
‘Deadliest Catch’ Junior Leaves A Gift On Keith’s Pot, What Is It?