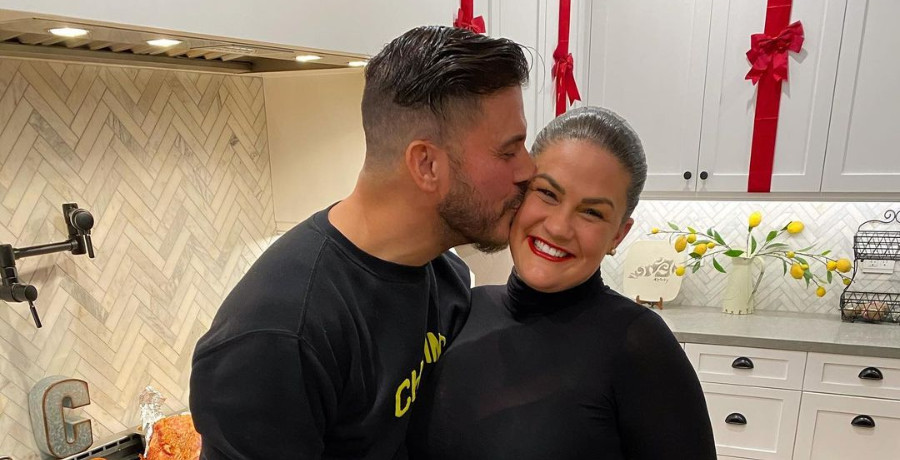 Jax Taylor and Brittany Cartwright are eager to meet their son. The couple quit Vanderpump Rules shortly after they announced they were expecting a baby. Brittany is about six weeks away from her due date. That makes it the perfect time for a maternity shoot. Both TV personalities took to their respective social media accounts to share the gorgeous photos.

Anyone watching Vanderpump Rules since the beginning cannot imagine the day Jax Taylor would be a father. During his eight seasons on the show, he was known for fighting, cheating and general immaturity. But it seems Jax Taylor has grown up.

First came the wedding in summer of 2019. A little over a year later, Brittany and Jax announced they were expecting their first child, a son. Several other Vanderpump Rules stars are having kids, too. Stassi Schroeder had her baby girl in January.

Like Brittany, Lala Kent and Scheana Shay are due in April.

Jax is looking forward to raising a son. Earlier this week, he shared photos from the couple’s maternity shoot. Alongside the photos, he included a short but sweet note to his baby. The note was filled with life advice such as “play as hard as you work” and “cry if you must.”

The note began with a simple wish: for ‘Baby Cauchi’ to “have the very best life imaginable.”

Jax and Brittany are “counting down the minutes” until they can meet their baby boy.

Brittany shared some photos from the maternity shoot on her own Instagram. She has always been open about how being a mom is her greatest dream. The caption she included with the photo only highlights that dream.

She wrote that the baby has “already stolen” their hearts.

Her former Vanderpump Rules co-star Kristen Doute left a comment praising the photos as “phenomenal.” She also wrote that she “can’t wait” to be the baby’s honorary aunt.

Along with maternity shoots, decorating a nursery is a must-do before the baby’s arrival. Bravo TV snagged pictures from Brittany’s Instagram of the nursery’s progress. Reportedly, the baby will have a dinosaur-themed nursery. That includes homemade “framed fronds and wooden dinosaur tracks.”

It seems that Jax, Brittany and the nursery are ready for the baby. It won’t be too much longer until ‘Baby Cauchi’ is ready to meet the world.

Brittany and Jax won’t return for another season of Vanderpump Rules. Bravo has yet to announce when Season 9 will be back on the schedule. Follow us on Twitter for all the latest TV news.

Why Isn’t A New Episode Of ‘Shameless’ On This Weekend?
Weekly ‘General Hospital’ Spoilers: Nikolas’ Plan Could Cause Heartbreak
‘The Bold And The Beautiful’ Spoilers: Could Zoe Leave Town For Good?
Matt James Partying With Questionably Young Tik-Tokers?
‘Bringing Up Bates’ Preview: The Family Takes A Walk Down Memory Lane