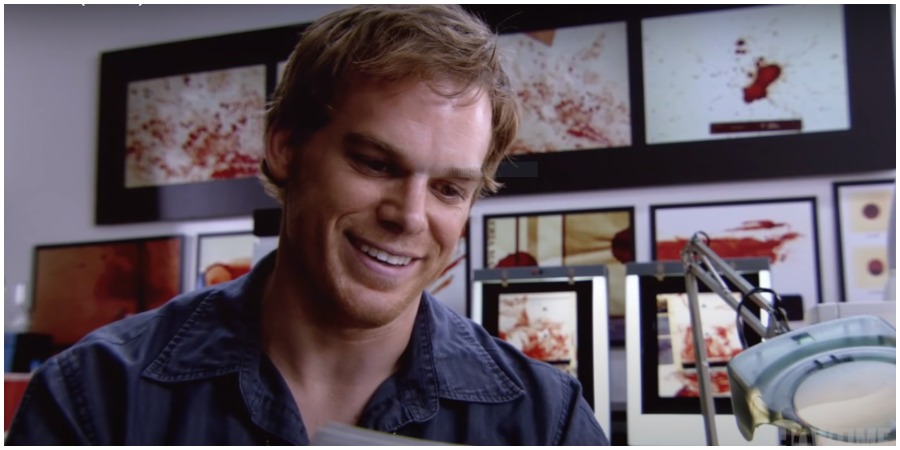 Dexter fans are rejoicing this week. Showtime has finally offered up a look at the revival. Of course, Michael C. Hall is front and center as the titular character, Dexter Morgan. The Season 9 sneak peek is creating buzz among viewers who are impatiently waiting for the return of the serial killer drama.

This week, Viacom released their sizzle reel for investors, and Dexter ended up stealing the show. Pop Culture reports that the reel only gave a quick glance of Hall as the lovable killer. However, it was enough to get fans talking. In the pic, Dexter is seen standing in front of a window. He has an ominous look on his face while he stares into the camera.

Behind him, moonlight seems to peer through the glass, which is covered with a thin, white curtain. However, the area around him is dark. Dexter appears to have a shorter hairstyle that viewers have become accustomed to. He also looks a tad bit older than the last time we saw him.

Dexter Season 9 is billed as a limited series. This means that there’s not much hope for Season 10. However, it’s not impossible. The series will likely be buzzed about when it’s released later this year. Of course, many fans will also want to watch the first eight seasons of the series as a refresher course.

When fans last saw Dexter, he had just lost his sister, Debra. He was grieving and had allowed his son, Harrison, to go off with his girlfriend Hannah. The two left the country and Dexter faked his death. At the end of the series finale, it was revealed that he was living a new life in an Oregan logging town and working as a lumberjack.

Looking to right the wrongs of the original series finale

The series finale was widely criticized by viewers. So much so that Michael C. Hall has stated that the revival could be a way to right the wrongs of the original series ending.

“It was a combination of the scripts and the timing. I always thought maybe the time will reveal itself when it’s the right time to do it and it did. And I’m excited. I was just visiting the sets the other day and it’s real. It’s really happening.”

In addition, Hall says he’s excited about returning to his former character.

“I’m looking forward to getting back into Dexter’s shoes,” the actor stated, per Comic Book. “I don’t really know what to expect, as I’ve never returned to a job after so much time. Having Dexter in a completely different context, we’ll see how that feels. It’s been interesting to figure out how to do that and I thought it was time to find out what the hell happened to him,” he adds.

Dexter Season 9 will air on Showtime later this year.