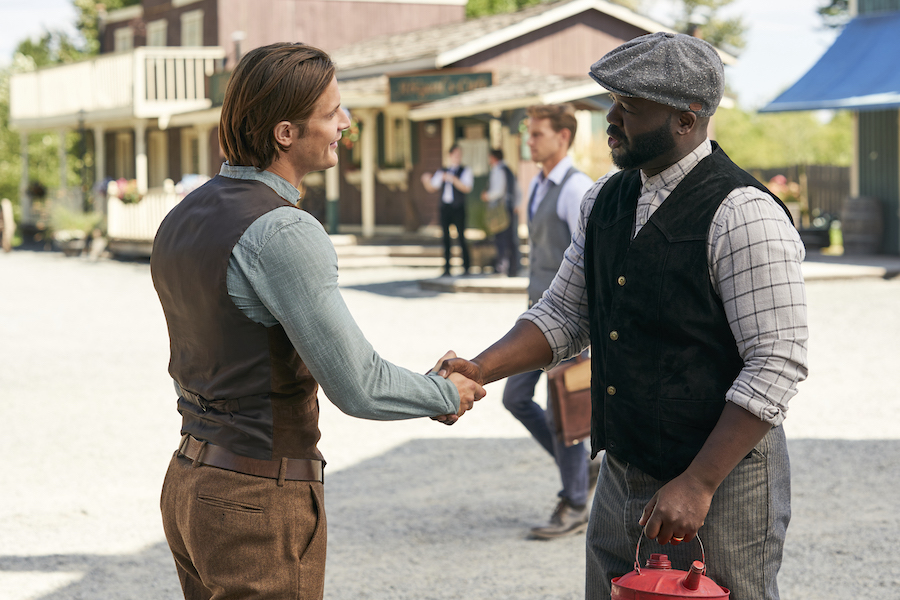 Hearties know that Hope Valley is a special place, so it is no surprise that there is a new family moving there in When Calls The Heart Season 8. Who are the Canfield family and why is Hope Valley so perfect for them?

Why Does Joseph Canfield Want To Live In Hope Valley?

Hearties have long realized that According to an exclusive ET video, we learn a bit why there is a newcomer to Hope Valley. The When Calls The Heart Season 8 newcomer, Joseph Canfield spoke to Bill Avery (Jack Wagner) as to why he knew this was a perfect place to live.

First, we learn that Joseph found Hope Valley by accident. He was there to make a delivery. “I liked it so much, I decided to have another look.” Stroking his horse, Bill agrees, sharing that the older he gets, the more he begins to “appreciate” Hope Valley.

When Joseph points out the church, he says that he wants to take his family to the church. Bill tries to sway him away from that idea. He warns that currently, there is not a pastor.

Joseph tells Bill that he is ready to settle in. He wants to run the gas station as he predicts that there will soon be more cars in Hope Valley. Maybe Bill can help? Bill knows the right guy that can help the Canfields get some land, although it is a little farther away. Joseph is content, satisfied that Hope Valley is his new home.

Who Are The Canfields, The New When Calls The Heart Residents?

When Calls The Heart Season 8 features a new family moving to Hope Valley. Are you ready to meet the Canfield family? The Canfields are a family of four who are ready for a fresh start.

Vienna portrays Angela Canfield. Visually impaired, this 12-year-old is musically gifted. She will grace Hope Valley with her beautiful piano playing. As for Cooper Canfield, played by Elias, he is a fun nine-year-old. Cooper is considered a “wonderful addition” to the schoolroom. Sounds like he will be a lot of fun and a bright light in Hope Valley.

Over the first seven seasons of When Calls The Heart, Elizabeth Thatcher Thornton (Erin Krakow) has had some schoolroom issues she has had to overcome. However, the situation with Angela going to school is unique and will cause some conflict in Season 8. That is because Minnie is very protective of her daughter and is not so keen to allow Angela to go to school.

Elizabeth does not agree. She thinks Angela needs to be with children her own age. What can she do to convince Angela’s mama that she can be trusted? Can she break through to Minnie? Hearties, you know that Elizabeth is strong and can!

When Calls The Heart Season 8 airs on Sunday nights at 9 p.m. Eastern, on the Hallmark Channel.