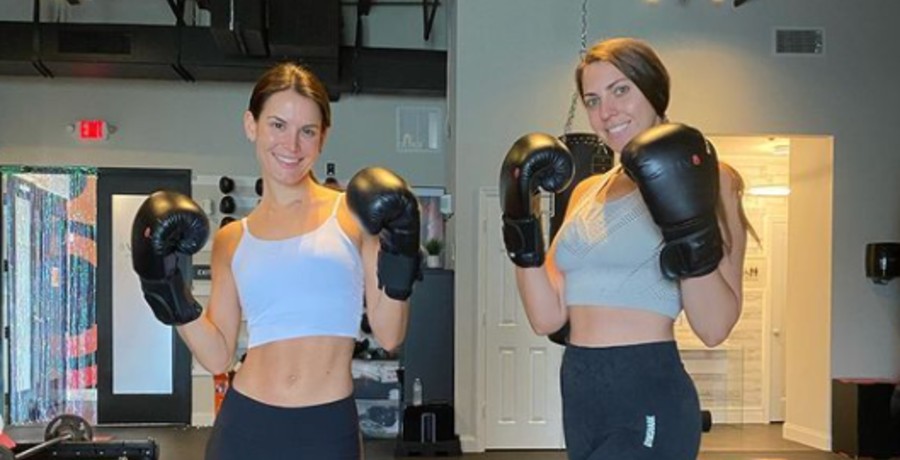 One person you wouldn’t expect to see Victoria Larson posing with is JP Caruso. Yet, on his Instagram, he is posing with her wearing matching clothes. While she was let go from The Bachelor for setting up a toxic environment for the other girls, she’s very much still a part of Bachelor nation.

The reason you wouldn’t expect to see Tyler Cameron’s good friend with Victoria is because of a leaked video. In it, Caruso is heard asking Matt if Victoria had a good body because it didn’t look like it. Queen Victoria annoyed a lot of fans with the way she behaved on the show, but no one wants someone to be body shamed. The picture on his Instagram says, “she was always the Jersey Jerry.”

Why Were Victoria Larson And JP Caruso Together?

According to Yahoo Lifestyle, Victoria commented on the video, “Cute… I love my body.” She also shared a bikini picture on her Instagram. Victoria and JP’s shirts are for Basic Aesthetics. JP was rumored to be a contestant on Clare’s season but wasn’t for some reason. Some people think they are both trying to stay relevant for Bachelor in Paradise.

Their TikTok showed her sitting in the chair for treatment and then later her story said no more undereye bags for her, something Bachelor nation talked about a lot. She said, “I thought my undereye bags were Chanel, but so much better without them.”

Screenrant reported Victoria Larson had a hard time after her elimination on the show. She even deleted her Instagram account only to bring it back later. Now she spoke to TMZ about the body shaming and said the guys were just trying to throw Matt off of his game. She also said the person was non-existent to her so it didn’t really matter. If it is JP in the background saying those things, he clearly exists to her.

Could It Be A Strategic Move On JP’s Side?

Some fans think that JP meeting up with Larson is strategic for him. One said, “that man just wants clout because he didn’t make it on The Bachelorette.” There isn’t a way fans will forget Victoria’s bullying and crown snatching. She’s likely to saw a lot more meme-worthy stuff at The Women Tell All.  Fans went to Instagram to comment on the picture together and several shared their opinion about Victoria.

Caruso commented telling people to chill out, after his photo got a lot of hate. He said, “holy smokes people! Life is short! Be nice and kind! Spread love not hate!” Tune in to continue Matt’s journey Mondays on ABC. What do you think about Victoria and JP hanging together? Do you think it’s strategic or not? Comment with your thoughts below.