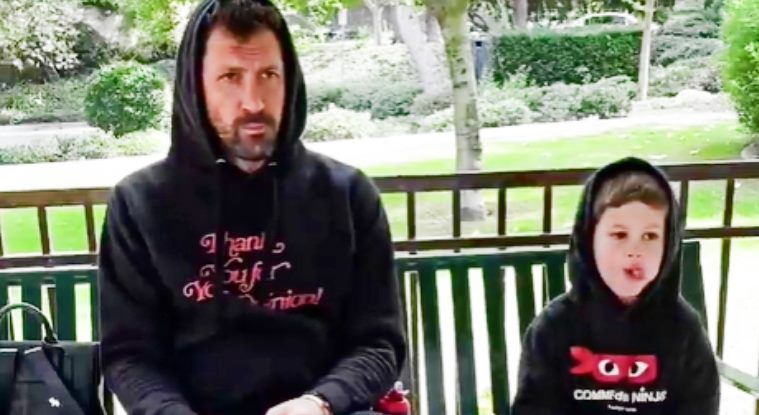 Maksim Chmerkovskiy may have a reputation for being tough in the ballroom. However, it seems like he’s a sweetheart when it comes to his son. He and his wife, fellow dancer Peta Murgatroyd, are the parents of a 4-year-old, Shai. The 41-year-old dancer recently posted an Instagram video documenting just how grown up his little boy is now.

In the video, Maks films Peta knocking on the bathroom door and talking to Shai inside.

“Didn’t he say he wants to do it by himself?” Maks asks his wife. Peta glares over her shoulder at her husband.

“He specifically asked you not to come in. What are you doing?” Maks joked. Peta proceeds to look sad and wait for Shai to finish up in the bathroom.

“One of many NEW reasons for my favourite Cancer to cry. @petamurgatroyd ‘s nightmare was literally Shai not asking her for help because he’s getting old. I guess that feeling is universal,” Maks captioned the video. “This one I get too. Kinda teared up myself. Pops’ [sic] words like ‘I would still wipe my sons’ butts if they let me’ never made any damn sense….until now.

“I feel so much new stuff for this little guy that I can’t explain, but I’m always reminded of the same feelings my parents had for me and I feel like I’m doing this whole parenting thing right. I hope. PS Peta is still tearing up 😭😭😭” Maks finished.

Will Maks Chmerkovskiy’s son grow up to be a dancer too?

Shai Chmerkovskiy turned 4 in January and his parents suspect he may grow up to be a dancer too.

“He has started dancing,” Peta told Us Weekly during DWTS Season 29. “I don’t know if I would call it dancing dancing but he’s trying. He’s 3, so I can’t expect that much but he’s trying to do the Cha Cha right now and he did a little bit of Waltz the other day.”

Most of the pros on Dancing With The Stars began their dancing career when they were about Shai’s age. So it’s not unthinkable that his parents are trying to teach him more steps.

The famous family could grow a little more

Peta Murgatroyd has been very vocal about wanting more children. She told Us Weekly that she and Maks would like to try for a second child soon shortly after she left DWTS last season.

Neither Peta nor Maks have made a pregnancy announcement yet. But at this point, it’s likely Peta would need to sit out Dancing With The Stars this season if she does get pregnant soon. Lindsay Arnold and Witney Carson both sat out Season 29 due to their pregnancies.

Would you like to see another Chmerkovskiy baby? Be sure to let us know what you think in the comments.