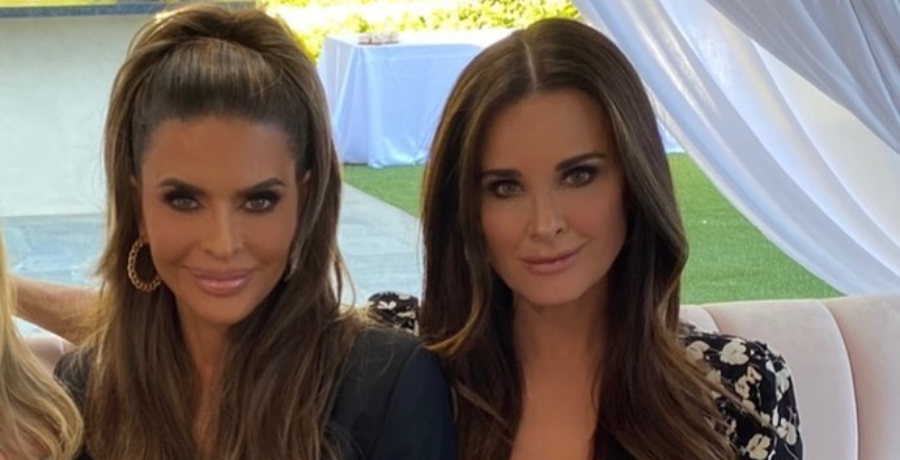 RHOBH Season 11 is currently in production. It has had many bumps along the way. Like other shows, it has been rocked by the coronavirus pandemic. Some of the cast and crew tested positive for the novel virus. Two of those cast members include Kyle Richards and her sister Kathy Hilton.

In the meantime, Erika Jayne has been making headlines. Fans are still buzzing about her divorce from Tom Girardi as well as their embezzlement case. They’re eager to see what the new season will address and what topics it will avoid. Dorit Kemsley, Erika Jayne, Garcelle Beauvais, Kyle Richards, Lisa Rinna, and Sutton Stracke are all returning this year.

Check out the RHOBH Season 11 looks

The RHOBH ladies showed off their opening sequence looks. The theme for this year is the same as last – COLOR. In Season 10 of The Real Housewives of Beverly Hills, the cast wore neon pinks, yellows, and greens. This year, the ladies are embracing even more color. Kyle Richards, Dorit Kemsley, Erika Jayne, Lisa Rinna, and newbie Crystal Kung Minkoff showed off their vibrant dresses.

Kyle opted for a purple one-shoulder gown. She accessorized the look with diamond jewelry. The 52-year-old also brought back her signature long brown hair. As for Crystal, she wore a pink mini dress which is perfect for her petite frame. She paired the look with a pair of matching hoops. RHOBH fans on the Queens of Bravo page agree that both ladies look beautiful.

Kyle reveals another of her outfits for #RHOBH S11. She looks amazing 💎 pic.twitter.com/CvpJCl8xRg

Come thru queen! Crystal reveals her look for #RHOBH 💎😭 pic.twitter.com/ISvZzxw0RT

Of course, Dorit is the one who looks the most glam. She rocked a royal blue gown that featured a high slit. She paired the hot look with strappy high heel shows and long blonde wavy hair. Some fans think Dorit’s look is the best one yet. Meanwhile, others say they don’t recognize her. One fan even commented that she looks like Australian rapper Iggy Azalea. Another called her “Dorit Erika Kardashian.”

Newly divorced Erika Jayne also wore pink from head-to-toe. She’s having a moment with her ongoing lawsuits. But that’s not going to stop her from being glamorous. The daring dress showed plenty of leg and cleavage. But RHOBH fans are not here for the look. They want to know why she’s back on the show.

“Why is she back?” one fan wrote. “She brings nothing to the show. Absolutely nothing. And she’s up to her wig line in lawsuits for fraud. Why do I want to see someone who stole from various victims? And no way…she didn’t know.”

“Why is she still on the show?” a second user pondered. “She has no storyline.” One viewer noted that she might only be able to talk about her divorce. However, some have a feeling that Season 11 will be her last. They agree that she’s “boring” and “done” for.

Lisa Rinna is also showing off plenty of cleavage. She slipped into a yellow dress that featured billowing sleeves and a low neckline. Rinna also brought back her signature hairstyle. She accessorized the look with diamond earrings.

Lisa Rinna’s got a new look for #RHOBH 💎 pic.twitter.com/GqESoaJFxx

“Who cares,” one fan commented. “Back again with no storyline,” another added. One even called her the “sh*ttiest friend in the world.” But there are some who think she’s fun and adds something to the show.

Fans haven’t gotten to see Garcelle or Kathy’s looks. And they were hoping that Sutton would be a diamond holder this season. It appears that she’ll remain a friend of the Housewives. What are your thoughts on the RHOBH Season 11 looks? Sound off below in the comments.