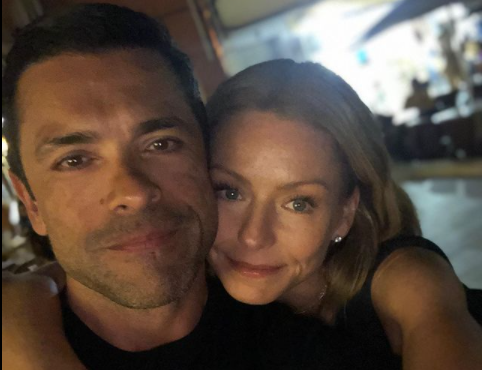 Kelly Ripa reminisced to ET’s Rachel Smith about how she and her husband, Mark Consuelos met and the show that changed her life. Ripa and Consuelos met on the job. Consuelos auditioned to portray Mateo Santos, opposite of Ripa’s character Hayley Vaughn. Kelly loved being a part of the show and says the show is responsible for the life she has.  “All My Children is responsible for my entire life. I do not say this lightly. I met my husband on All My Children.”

The long-running soap opera premiered in 1970 and Kelly joined the cast in 1990. Her character Hayley Vaughn entered the show as a troubled teenager with a lot of baggage, and she almost instantly became a fan favorite. Hayley had to deal with some typical soap opera drama. But things started to change when Mateo Santos (Mark Consuelos) joined the show. Kelly has often talked about knowing that Mark was the man she was going to marry immediately.

Kelly recalls auditioning numerous actors for the part of Mateo. But Judy Blye Wilson, the casting director, came in one day and simply told everyone, “I found him.” Blye handed Kelly a picture of Mark and that was it. “When I saw him, the photograph of him, I saw my entire future with him flash before — like I saw it. And I don’t believe in any of that and now I do because of that moment.”

Kelly admits that she was a very pragmatic person at the time, and wanted to remain single. But when you know, you know and Kelly Ripa knew. Mark and Kelly became a couple during filming and eloped to Las Vegas in 1996. They went on to act together until 2002, a year after Kelly was hired on Live with Regis and Kelly.

Mark and Kelly have always been vocal about their enduring love for All My Children. Kelly reprised her role in 2010 for two episodes to celebrate the show’s fortieth anniversary. Sadly the soap ending the following year. Kelly was “devastated” when she heard the show was going off the air. “Not for myself because I had left the show by then, but I was devastated for the fan base cause it means so much to them.”

Because of how much All My Children meant to Kelly Ripa and Mark they are now taking on the roles of executive producers for Pine Valley. The show is in early development and will be a follow-up series to All My Children airing on ABC.

And although the power couple is busy working on this project Kelly has her eye on their future retirement. She and co-host Ryan Seacrest will be doing a virtual tour of dream retirement destinations on Live with Kelly and Ryan this week. One of the locations is Palm Springs, California, which just so happens to be exactly where Kelly wants to retire.