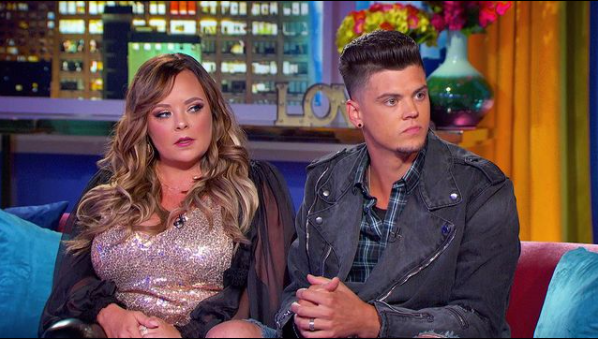 Catelynn Lowell and Tyler Baltierra are catching a lot of shade from fans after Vaeda’s second birthday celebration. Why are fans upset? Read on to get the details.

Teen Mom OG cast members Catelynn Lowell and Tyler Baltierra are getting some major backlash from show fans. Why? It seems that a lot of viewers aren’t fond of their parenting choices. Many think they give preferential treatment to their first child, Carly, whom they gave up for adoption. Fans have been very vocal about how they have gone out of their way to have large parties for Carly – while 2nd and 3rd children Novalee and now 2-year-old Vaeda, get much smaller celebrations.

Tyler and Catelynn had a small celebration for Vaeda at their home this past Saturday.  In an effort to share the day with fans, the 28-year-old mom posted a short clip to her Instagram. The video featured little Vaeda in her high chair, surrounded by relatives singing Happy Birthday.

During the song, Vaeda screams and cries incessantly, very unhappy with the chaos around her. Vaeda beats on her high chair in protest. In the background, Catelynn laughs at her daughter’s outburst.

Shortly after the video went live on the site, the comments section exploded. While some viewers sent only encouragement and “Happy Birthday” wishes for Vaeda, many viewers were quick to criticize everything from the pantry door to Vaeda’s behavior.

The main issue that people seemed to have was that Vaeda was not getting the same level of love and adoration on her birthday as her oldest biological sister, Carly.

It appears that a lot of the flak coming in from followers has surfaced over the size of a cupcake. Fans watching Catelynn Lowell’s Instagram video remembered the couple celebrating their 11-year-old daughter’s birthday in the past and felt like the effort put in for both kids was not equal.

As fans of the show know, Carly is Tyler and Catelynn’s first child. The pair ultimately decided to give her up for adoption. These young parents didn’t feel they would be able to give Carly the life she deserved.

According to Pop Culture, Carly lives with her adopted family in North Carolina. Tyler and Catelynn have a great relationship with the family. Carly’s adoptive family has graciously allowed them to remain in contact with Carly through the years.

So, now that you have some backstory – back to the turmoil.

What appears to be causing issues here is fans remembering back to Carly’s birthday and the cake she got. They have taken to comparing that cake to Vaeda’s cupcake.

Now, while logically, one could say, “Well, because of the pandemic maybe funds were tighter this year,” or, “Perhaps they didn’t want the extra risk of purchasing a cake from a store.” It could just be that the couple decided to give Vaeda her own tiny cupcake because of her age.

Either way, Teen Mom OG fans were absolutely ruthless with their commentary and opinions of the matter.

So, what were the trolls saying about the tiny cupcake? Between comments on the Instagram post and a Teem Mom OG discussion on Reddit, it would be easy to understand if Catelynn and Tyler disappeared from social media. They might need a moment to breathe after this unexpected ambush.

In addition to the “tiny cupcake” issue, some commented that they were torturing their child by making her sit there through the birthday song. Others commented about Vaeda’s cupcake. They took major issue with its size and how small it was in comparison to Carly’s cake. This struck a heavy chord with some who pointed out Catelynn and Tyler aren’t her caregivers.

Beyond that, some fans even went so far as to “diagnose” Vaeda as “autistic.” They based this idea on the notion of Vaeda appearing to have an aversion to the loud noise going on around her.

Many negative comments have been removed from the post. In many places, choppy conversations seem to remain. New viewers reading the post will see comments about people being so judgemental and negative but no actual comments of that nature to justify the comments.

So, what are your thoughts on the “Tiny Cupcake Debacle?” Do you think that fans have gone overboard with their assumptions? Tell us in the comments and be sure to share this piece with other Teen Mom OG fans. As always, stay tuned to TV Shows Ace for all the latest news on Teen Mom.

‘Deadliest Catch’ Junior Leaves A Gift On Keith’s Pot, What Is It?
Did Tom Bergeron Just Hint At His Return To ‘Dancing With The Stars?’
‘My 600-lb Life’: Is Dr Now Still Doing Surgeries at 76?
New Photo Of Jana Duggar & Rumored BF Leaked – See It Here
Tammy Slaton Demands Fans Give Her The ‘Credit’ She ‘Deserves’