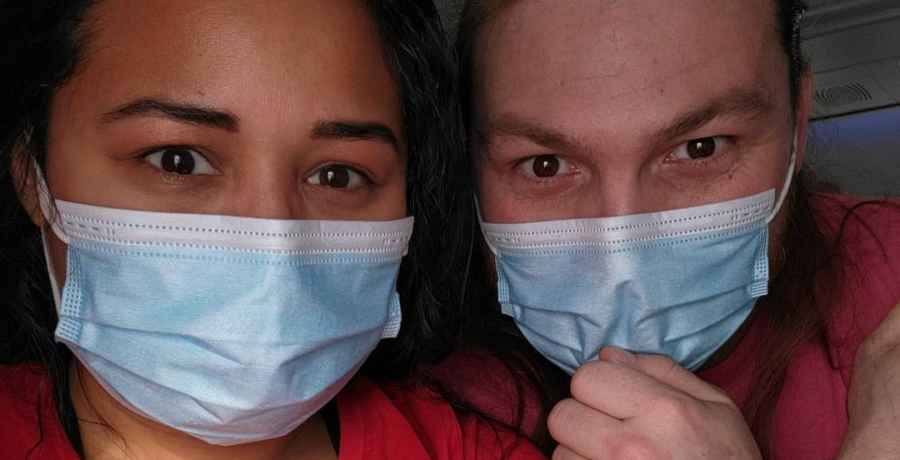 90 Day Fiance stars Syngin Colchester and Tania Maduro have traveled a rocky road with their relationship. However, when a fan spotted the pair at LAX airport, we now know they are still together. After the fan posted an image on Reddit, Tania and Syngin confirmed they had been traveling, despite COVID-19

Tania Maduro and Syngin Colchester are one of the many 90 Day Fiance couples that seemed destined to fail. Fans watched their drama on the TLC reality show and couldn’t see how their marriage could last. South African Syngin was homesick in the States, but rather than comfort him, Tania criticized his drinking. In fact, she has been unkind to her husband all along.  She did, however, help him to get his green card paperwork done and he has been living in her native Connecticut ever since.

Recently, Tania and Syngin have shared some pretty racy images to their respective Instagram accounts, which hint at them still being together. However, that fact has now been confirmed by a 90 Day Fiance fan on Reddit.

Fan spots Tania and Syngin at the airport

Right now, it isn’t recommended to travel during the COVID-19 pandemic. However, a Reddit user spotted Tania and Syngin at LAX airport. They allowed her to take a photo with them, which she shared on the platform, captioned, “Tania and Syngin sighting on my flight from LAX to ATL! They were nice enough to let me take a picture!”

Tania isn’t a favorite with fans and the comments flowed. One 90 Day Fiance fan used Tania’s infamous line while commenting, “They’re still together!?! He’s not even her soul mate.”  Viewers of the TLC reality show will recall how devastated Syngin was when Tania said she didn’t consider him to be her soul mate.

Tania and Syngin sighting on my flight from LAX to ATL! They were nice enough to let me take a picture! from 90DayFiance

Other fans were rooting for Syngin in the comments, with one writing, “Love that you can tell Syngin is smiling even though he has a mask on.”  Another commented, saying they couldn’t believe the couple was still together and adding that they like Syngin. Many other Reddit users agreed that they also preferred the male half of the pair.

One fan made a cute comment, writing, “Syngin looks like the sweet lady owner of a small bookshop that I would def take a book recommendation from.” Meanwhile, another said he has developed a “dad bod.” However, many agreed that for someone at an airport at 4 a.m. with no sleep, they looked pretty good.

Why were the 90 Day Fiance stars traveling during COVID-19?

Soon after the Reddit post was published, Tania made a post to her Instagram. She included a series of images of themselves on the plane. In her lengthy caption, Tania went on to write that traveling during COVID is risky, not just for yourself, but for others.

She explained that she has turned down trips to Mexico, Florida and Hawaii for birthdays. This is because she believes traveling far for a vacation is a luxury that isn’t necessary during a pandemic. She wrote that she has been traveling to places within driving distance while keeping to the COVID safety measures. However, she then went on to write about their trip to California, where the fan spotted them at the airport.

A ‘very short-term gig in CA’

Tania explained that she had made a decision to accept a “very short-term gig” in California. She wrote that she and Syngin flew there and extended their trip by a couple of days to take advantage of the sun. Maduro reassured fans that they had two tests before the trip and were tested twice while in California. After returning, they will be quarantined for a week. Tania wrote that while they are relatively young and healthy, they don’t want to take chances with her older relatives.

Tania did urge fans to take care and not take chances by traveling, as it isn’t worth it.  She closed by writing that she will share more personal information on another post. Fans can read the full caption on the Instagram post here, where a funny video clip can also be seen of a trick Syngin played on Tania on the flight.

At least we know that for now, the couple appears to be happy together! Fans can catch Season 8 of 90 Day Fiance on TLC, Sundays at 8 pm ET.