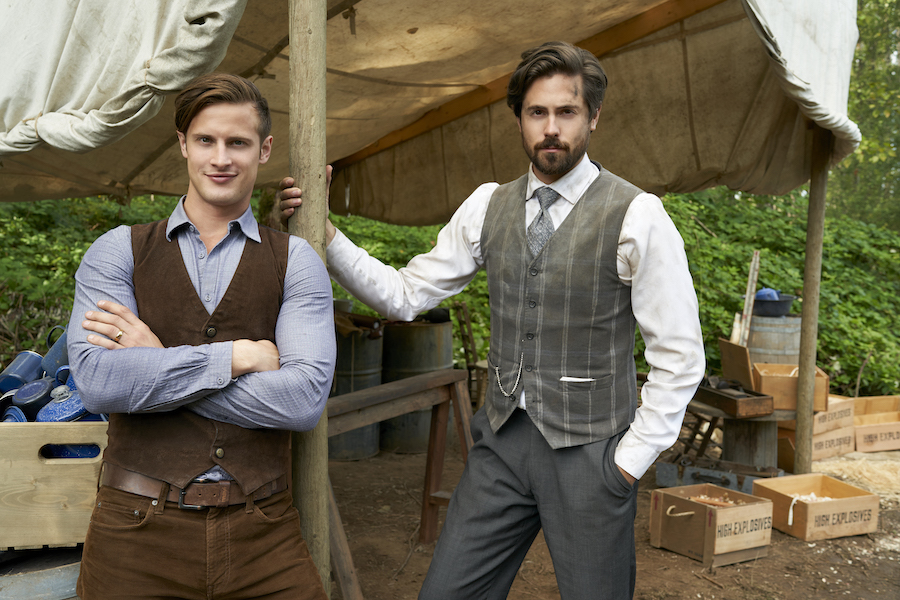 When Calls The Heart is returning for Season 8 on Sunday, February 21st. There are a lot of familiar faces returning, and a new Hope Valley family. Who will be part of the cast this season?

Who Is In When Calls The Heart Season 8?

When Calls The Heart Season 8 has a lot of familiar faces that Hearties will be happy to see. According to Hallmark, the following characters are returning?

Elizabeth Thatcher Thornton (Erin Krakow): Starting from Season 1, Elizabeth Thatcher has been Hope Valley’s teacher. After the death of her Mountie husband, Jack (Daniel Lissing), she has been courted by two men. In Season 8, she will finally end the love triangle and choose a man!

Nathan Grant (Kevin McGarry): Part of the love triangle, Mountie Nathan Grant arrived to Hope Valley in Season 6. Nathan is also a father figure to his orphaned niece Allie (Jaeda Lily Miller). This season, he resolves some issues that keep him from fully opening up to Elizabeth.

Lucas Bouchard (Chris McNally): The third person in the infamous Hope Valley love triangle, is saloon owner Lucas. Notably, Lucas is quite the entrepreneur. He is also part of the oil business with Henry Gowen (Martin Cummins). In Season 8, Lucas is dealing with some unexpected business issues.

Rosemary and Lee Coulter (Pascale Hutton and Kavan Smith): Rosemary and Lee have big personalities and an even bigger fan base. Previously, Rosemary was involved with Mountie Jack Thornton. We all know that didn’t work out. However, she found her man in Lee Coulter. This season, this happy couple are struggling with infertility issues.

Bill Avery (Jack Wagner): Hope Valley’s sheriff will be romancing a lady or two in When Calls The Heart Season 8.

Carson Shepherd and Faith Carter (Paul Greene and Andrea Brooks): The romance between the two doctors will sizzle in Season 8. But, Faith is a new person, now that she has left nursing, went to school, and is a doctor now.

Henry Gowan (Martin Cummins): Henry Gowan runs the oil company. Thankfully, Lucas helped him out, but he may still have some issues to deal with in Season 8.

Jesse and Clara Flynn (Aren Buchholz and Eva Bourne): Jesse and Clara got married in Season 7, but in Season 8, the honeymoon is over and reality has set in. How does this couple overcome their issues to this new reality?

When Calls The Heart Season 8 Introduces Fans To New Family

Angela Canfield is visually impaired. Mom Minnie is very protective of her daughter. So much so, she doesn’t want her to go to school. This makes Elizabeth find a way to get Angela into the classroom, and relieve her overprotective mom.

Don’t forget to watch the premiere of When Calls The Heart Season 8 on Sunday, February 21, at 9 p.m. Eastern, on the Hallmark Channel.

‘Yellowstone’ Fans Are Questioning The Role Of Law Enforcement
Would Abigail Heringer Join ‘Bachelor In Paradise’?
‘My 600-lb Life’ Update on Travis Henry: Where Is He Now?
Tammy Slaton Has Major Breakthrough: Is She Done With Excuses?
Rachel Lindsay Refuses To Share Opinion On Chris Harrison Drama