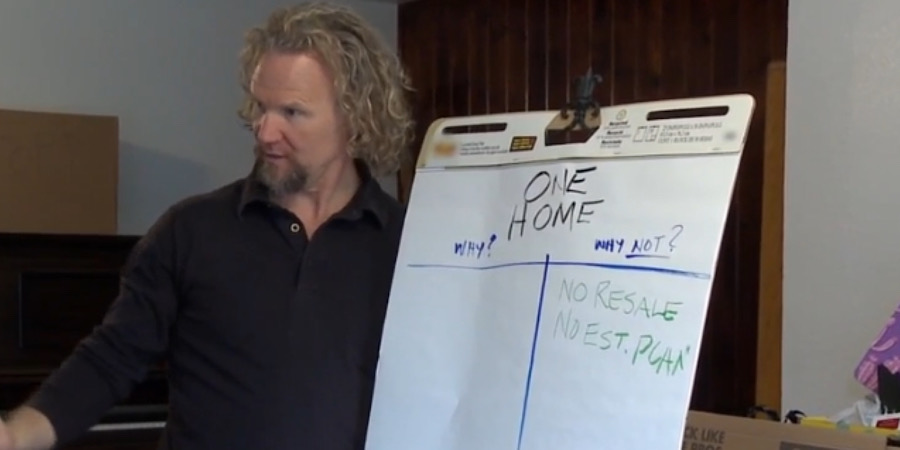 On the Season 15 premiere of Sister Wives, the women struggled to find their place in the family. Now that they are further divided in Flagstaff, it is taking a real toll on every aspect. Janelle called for a lunch where she asked the wives and Kody why they chose plural marriage or ‘The Principle.’ Kody turned it into a negative conversation rather than a working one. No one was happy with the direction. Luckily, everyone came together, in the end, to meet Maddie’s baby girl, Evie for the first time. But Meri was unable to be there, furthering the divide.

There may be some dissension in the family but it is not stopping them from planning a trip. The wives and Kody are visiting another plural family back in Utah, the Darger’s. They have been extremely vocal and proactive when it comes to the decriminalization of polygamy. They are all meeting at Meri’s to discuss the logistics of the trip and Janelle soon arrives. She is still thinking about the lunch they had and the emptiness she feels. Reflecting on living in Utah, she is reminded of when they opened up about their life as a plural family.

Immediately, the Browns were under police investigation. That triggered the quick move to Vegas in the middle of the night. The family sued the state of Utah and won, polygamy was decriminalized for a year. But then the state doubled down and made the crime even worse than before. Now, a new bill has been introduced for families like the Browns. They can be plural as long as they are law-abiding citizens. There are rules like no child brides and such, things to erase stigmas.

Christine is in Phoenix working so they are talking to her by phone. This will be a quick road trip to Utah but they are figuring out who will drive with whom. Kody has to make a quick turnaround for work and Christine thinks the trip is pointless. Why does Kody have to see the Darger family in person? Kody says he needs to speak to the patriarch face-to-face as it is more personal. He is also craving some time with another plural family. As the family is talking, Kody asks what would have happened if they had moved to Saint George, Utah. The only one who would have wanted to live there is Christine.

A Family Divided and the Flat Tire

For the trip to Utah, Kody feels if the wives don’t want to travel together, it is a sign they are disconnected. Meri sees there is a lack of effort since they all moved to Flagstaff. Last week, Janelle said the shift started in Vegas. It is now the morning of the trip and Christine is seeing Kody has overpacked. Based on luggage alone. Christine is saying they need two cars. This angers Kody because he thinks she is just trying to drive separately. They gather the wives and Kody feels there is a flat tire and immediately wants to go to the dealership.

Christine suggests they take other cars but no, Kody is adamant they go get a new tire. It is just a lot of bickering that is wasting time. When they arrive to get Meri, all she hears is Kody yelling. She proposes he take her car but he refuses. Robyn lets her know it has nothing to do with her but it still stings. She says she wishes she had flown. On the way to get the tire, the wives agree on one thing- they should go grab their family therapist, Nancy. This breaks the tension for the moment.

At the tire shop, Robyn says Kody needs to get over his minivan issue because her car is really comfy. They soon learn the tire is unrepairable. Thus, they must take Robyn’s car even though they can just call Joe over the phone. Janelle is worried about driving into Utah together because she still worries about polygamy being a crime. Robyn hates going where her family is illegal. In the car, Meri is complaining it is too hot and Christine is too cold and they haven’t even left Flagstaff.

Sister Wives Back In Utah!

They made it to Utah and the minivan held up just fine. It was not a bad drive and everyone got along and are now very excited to see the Dargers. Two of Joe’s wives are sisters and that’s fairly common in their community. Kody starts talking to Joe about kids and he comments that he is not sure if he is done having children. Robyn is taken aback because she knows Meri, Janelle, and Christine are done reproductively. Therefore, it just leaves her. So, for Kody to act like he is the one birthing these children is crazy to her. And she does not want to talk about this anymore.

Kody reflects on how he has always thought about being a father and what kind he’d hoped he would be. It has been a huge part of his identity for so many years now. The idea of one more still lingers and the same with the Dargers even though being grandparents is the greatest reward now. Meri notes having friends like them is what Kody really needs but it will be hard in Flagstaff.

They tour the home and the Dargers are under one roof. Though Joe does note he wants his own room and Kody tips his hat to that.

Under One Roof, Maybe?

One of the Darger wives asks about the living space they are looking at. Kody says he did design a single home for the family. Maybe it worked for the Browns in the past but it is not so feasible right now. Christine has been very vocal about the idea this one home will never work. They thought this was how it was supposed to be based on how they were raised. But Christine has seen both sides of the spectrum and it cannot be forced.

The Dargers say being under one roof, they are forced to deal with all of their issues. This has now become the biggest problem Meri, Janelle, Christine, and Robyn have faced since Vegas. Robyn opens up and says she feels like a stepmother at this point. Janelle knows her kids can go to Meri and Christine’s and freely go through their fridge without thinking. Because they were all raised together. It is not the same with Robyn because she came in right before Vegas.

The Dargers remember what life was like right before the Browns had to leave Utah. It was scary but Joe notes they are still together. Joe feels lucky because he is thriving with his plural community. However, he is a felon living the life he does as is Kody. Christine talks about how her grandfather was persecuted for speaking his truth but she feels now is the right time. They thank their friends for lunch and leave.

Next time, the ladies are ready to talk about the Coyote Pass land and the strain on Kody and Meri’s relationship is evident. Don’t miss Sister Wives Sunday nights on TLC and discovery+.