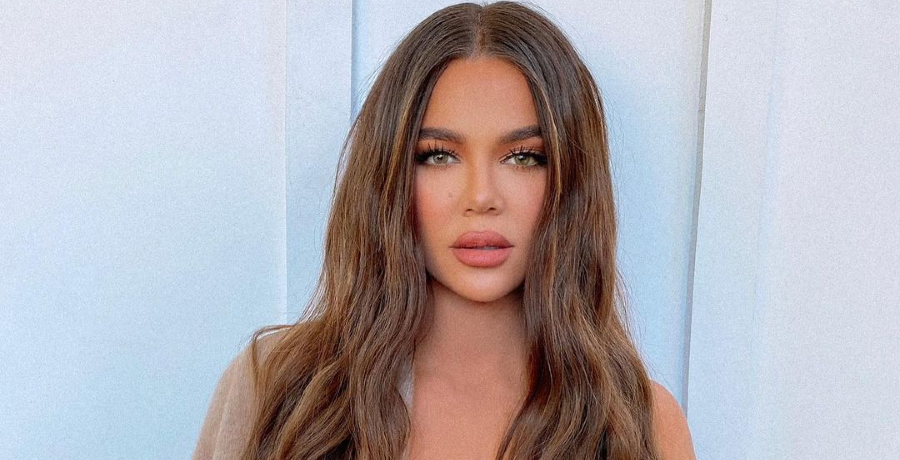 On Sunday, February 21st, Khloe Kardashian wants all the attention on her behind. The Keeping Up With the Kardashians star shared a bootylicious photo via Instagram. Khloe tried to keep her big behind covered with her left hand. But it was hard to hide it, even with her massive diamond ring.

Within two hours, the photo received over 1.2 million likes. Khloe wore that same diamond ring before. She used the hot photo to promote the new line of Good American shoes. But fans couldn’t keep their eyes off the rumored engagement ring.

The photo showed Khloe Kardashian squatting down in a black T-shirt, a brown thong, and tan ankle boots. She strategically placed her left hand on her butt to cover most of it up. But fans couldn’t but notice the ring that she’s wearing. The diamond ring was on that finger.

“New @goodamerican shoes are dropping 2.25,” Khloe wrote in the caption.

But fans were convinced that Khloe’s post was an engagement announcement. Some of them wanted to know more about the ring she was wearing. They know that she’s been back with Tristan Thompson for the past year. The two rekindled their relationship during quarantine in 2020. Here are some of the many comments on her post:

Khloe Kardashian wore that same diamond ring before. She was last spotted with it when she visited Tristan in Boston during the holidays. And then she was first spotted with it at her 36th birthday celebration. But some fans think the ring is too big.

They think that it makes her butt look tiny in comparison. “That engagement ring makes ur booty look small!!!!!!” one user joked. So, maybe Khloe used the ring to cover her famous behind. But some would argue that it would just cause the engagement rumors to swirl once again.

Is the couple ready to take the next step?

Khloe Kardashian has stressed that she wants to have another baby with Tristan. In an episode of Keeping Up With the Kardashians, Tristan and Khloe discussed the possibility of expanding their family. However, they have not confirmed the engagement rumors. At the time, an insider told ET! Online that they “aren’t engaged and it wouldn’t make sense for an engagement to happen right now.” Another source quashed the rumor to HollywoodLife.

“Khloe and Tristan are not engaged despite the rumors about their relationship,” the source told HollywoodLife. “They are getting along better than ever for the sake of True and are just focused on co-parenting. There is no truth to the rumors whatsoever.”

Although they’re not engaged, the couple appears close while co-parenting. Khloe wore that same diamond ring on separate occasions. And she just happens to love wearing big jewelry. But the Boston Celtics player sent Khloe flowers and balloons on Valentine’s Day. So, it’s likely that they are taking the next step.

What are your thoughts? Do you think Khloe is engaged? Sound off below in the comments.