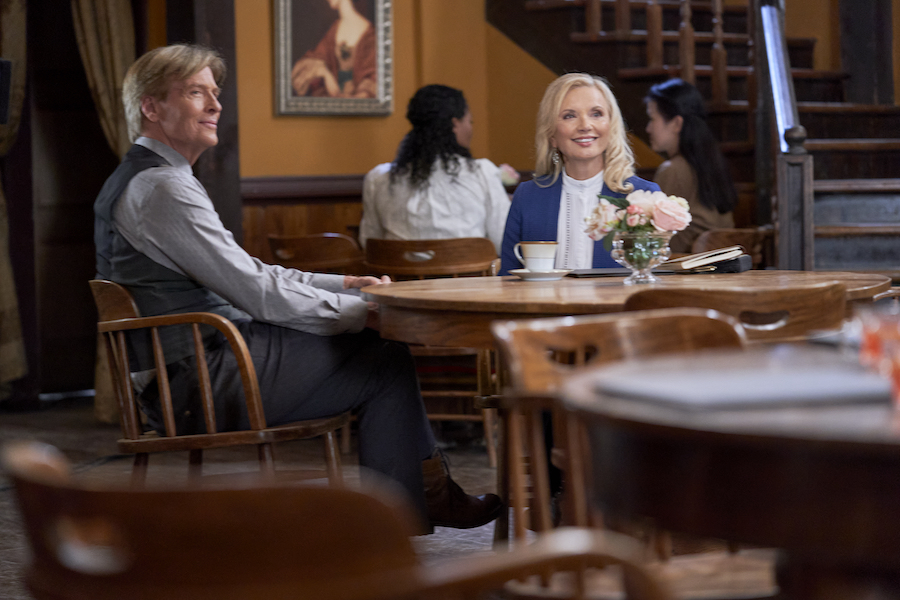 Hearties know that When Calls The Heart is more than a love triangle. There are a lot of entertaining characters and Hope Valley heartthrobs. Jack Wagner, who plays Bill Avery, is a fan favorite. Moreover, the seasoned actor is pretty darn excited for the upcoming season.

Are you ready for WCTH Season 8?

When Calls The Heart’s Jack Wagner Is Ready For Season 8!

Yes, WCTH is back for another season. Moreover, this promises to be a season of love. Does that Include Bill Avery? Maybe.

Will Bill Romance Lucas’ Mom, Helen In When Calls The Heart Season 8?

In the very first episode of When Calls The Heart Season 8, Lucas Bouchard’s mother, Helen (Teryl Rothery) has come to Hope Valley to visit her son and oversee Elizabeth’s (Erin Krakow) career. Already in the promo photos for the second episode, Helen and Bill are sitting at a table, at the saloon. Could that mean anything?

Wagner has said in the preview that “There is this current of love that flows in this series of When Calls the Heart.” Was he hinting that Bill and Helen are going to engage in a bit of flirting? Perhaps even court?

This would be quite fun for his character. It would also allow an opportunity to see Bill’s softer side. What do you think Hearties? Should Bill Avery date Lucas Bouchard’s mom?

When Calls The Heart’s Jack Wagner started out in soaps. He swept into Port Charles and General Hospital as Frisco Jones, Bold and the Beautiful as Nick Marone, Sunset Beach as Jacques Dumont and Santa Barbara as Warren Lockridge. Don’t forget the evening soaps. He was Dr. Peter Burns in Melrose Place.

Just last month, Wagner’s GH role was celebrated. According to Soaps, Wagner first appeared on the ABC soap on January 27, 1984. They were desperate at this time. John Stamos was leaving his role as Blackie Parrish. The soap needed a heartthrob.

They decided to bring in Frisco, while Blackie was still in Port Charles. The two characters became friends on the show, and GH fans everywhere fell for Frisco. And don’t forget, Jack Wagner also had a music career, along with bonafide hits like “All I Need,” and “Sneak Attack.”

Now, Jack Wagner is Bill Avery, and he is one of the Hope Valley heartthrobs.

Don’t forget to catch the When Calls The Heart Season 8 premiere on Sunday, February 21, at 9 p.m. on the Hallmark Channel.