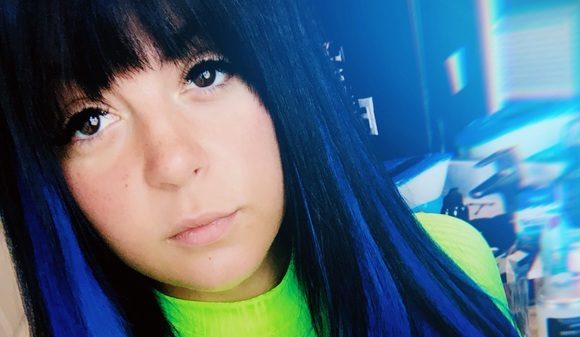 Lexi Martone of Unpolished shocked fans on social media recently when she bared it all in a racy snap captioned, “Happy ‘V’ Day.”

Lexi  Martone Shows off Her ‘V’ for Valentine’s Day

TLC star Lexi Martone turned the heads of her 265k followers recently when she posted a super racy snap on her Instagram account. In the artistic black and white snap, Lexi sits on the floor of her nail salon, nude. Her long black hair hangs down in front of her covering her chest. The reality celeb posed sitting with legs splayed to either side of her.

In the photo, Lexi’s long, lean legs are like a runway for dozens of sparkling candies scattered on the floor around her. The photo concept almost seems to be that these glittery, diamond-like candies have burst from her like a pinata. The candies sparkle in great contrast to the hard, black floor and give the shot a very almost ‘expensive’ feel.

Let’s get real – in many situations when a reality star strips down on social media – they get some major backlash. Fortunately for Lexi Martone, negativity was not something her fans were dishing. While researching this post, TV Shows Ace writers scrolled the comments to gauge the fan reaction.

The result? Lexi’s fans loved it.

The post subsequently received a huge outpouring of support from fans. In just two days on the site, it gathered more than 14k likes and 300 comments. While fans say they thought the post was ‘unlike’ Lexi, they find the snap ‘gorgeous’ and ‘sexy’. They also comment on the photo being ‘tasteful’ and ‘artfully done.’

If you watch Unpolished on TLC, you’ve likely seen that Lexi has some major issues revolving around her relationship with her Mom, Jennifer. The two are constantly at odds. Lexi Martone has made it very clear that there are major double standards when it comes to how Jennifer treats Lexi in comparison to her sister, Bria Martone. Lexi often expresses feeling undervalued in comparison to her sister.

Needless to say, fans were shocked to see Jennifer leaving such positive comments on Lexi’s snap. She appeared to pop in just to give her daughter some encouragement and compliments!

“That’s my gorgeous beauty,” Jennifer wrote on her daughter’s photo. “I’m so proud of you and how comfortable you are being “you” ”  The Martone family matriarch finished her statement by adding “BEAUTY AND BRAINS very dangerous combo”. Fans of the show whole-heartedly agreed with Jennifer’s praise, blowing up the post with a plethora of fire, heart, and queen emoticons.

What do you think about Lexi’s ‘V’alentines Day Snap? Let us know in the comments. You can catch Unpolished along with us, Tuesdays on TLC.

Be sure to stay tuned to Tv Shows Ace for all the latest on the ladies of Unpolished and the rest of your favorite reality series.