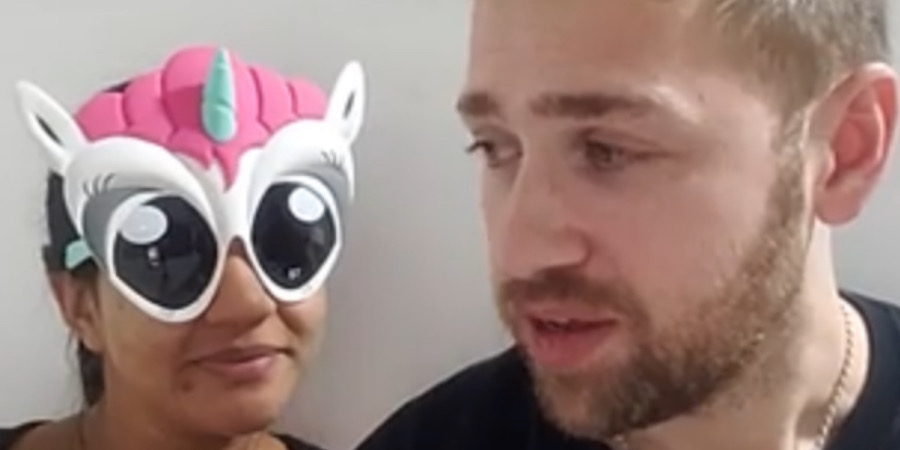 Former 90 Day Fiance cast member Paul Staehle has never shied-away away from controversy. On Valentine’s Day, he posted a feces-filled toilet water video on Instagram. Now, the father of two is threatening to prosecute fans for sharing content from him and Karine’s OnlyFans. And followers are trying to let him know it won’t be as easy as he thinks.

Paul and Karine’s relationship started more dramatically. When he traveled to Brazil to meet her, they could not communicate with words. Therefore, they had to rely on a translator app for everything. To make matters worse, Paul was coming over with a criminal record. He had yet to tell Karine he was found guilty of felony arson and had been in jail. Eventually, Paul had to bring all of his records overseas to show to Karine’s father for his approval. Somehow, after much questioning, her parents said he was a suitable husband for their daughter.

Paul went back and forth between Brazil and America because he kept running out of money and could not afford to support his family. Once the two settled in America, there were accusations of Karine cheating. Eventually, she gave birth to their first child (she previously suffered a miscarriage) in March 2019. But the drama continued and the cheating accusations did not stop.

In the summer of 2020, Karine was said to be pregnant again. Then, she went missing, according to Paul but Karine said she was safe. She soon filed a restraining order against her husband and it looked like the marriage was over. Then, they were seen on Cameo and OnlyFans together. The marriage seemed to be very much on.

While pregnant with their second son, Karine started her personal OnlyFans account. It was free, rare for this forum, and posed nearly nude. Many Instagram forums took screengrabs from the page and shared them to get viewer reactions. Paul shared he was jumping on the OF bandwagon with more family-friendly content. Now, Karine’s page is the sole focus.

Along with some other 90 Day Fiance cast members, inappropriate content has been leaked and Paul wants to hire legal counsel to sue the leakers. Also impacted by the “leak” are Larissa Lima, Stephanie Matto, and Deavan Clegg. But fans are saying they do not have a case. One follower said: “they technically didn’t leak it because it was sold through onlyfans, whoever bought it leaked it.”

One commenter said they should not sell inappropriate content if they do not want to risk a leak. Another believed they probably made the content purposely so they could sue. It is uncertain how far the cast will take it. Do you think Paul has a case? Let us know in the comments.