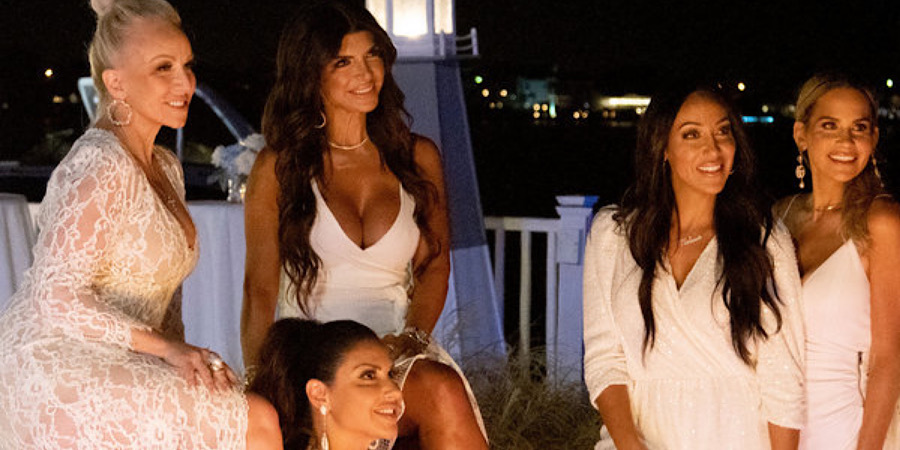 Last season on the RHONJ, Joe Giudice was at the center. Would he get deported after he was released from prison? After time in ICE, he went back to Italy, despite several appeals. Sadly, his marriage to Teresa could not be salvaged and she told him she wanted a divorce. Teresa also had to face her friendship with Danielle was filled with lies and deceit. Jackie was eventually revealed to possibly be the richest housewife, shocking everyone. Now, Teresa has a new boyfriend and Melissa is caught in a cheating scandal. And no one can forget Covid. It is time for Season 11.

Family and Parties- The RHONJ Way

Jackie is preparing a birthday party for husband, Evan. It is the first time they have done anything in a long time. Jackie has been hunkered down with her kids as well as cleaning a lot so it will be nice to be with adults. Melissa seconds the sentiment and acknowledges they have not seen anyone in a while. She comments that Margaret has had her boobs done and Dolores had another butt procedure. Over at Jennifer’s, her and her husband are trying to figure out which male Dolores will be bringing to the party. She does have Frank and David so it is a toss up.

Dolores is modeling her new bum for Frank in the closet. Margaret is picking out a new outfit to compliment her new chest, hoping Jennifer won’t cause any trouble. Teresa is FaceTiming with Gia and is talking about how Nono passed away. Gia is happy her mom is going out and forgetting her problems. At the party, Margaret questions why they are celebrating this particular birthday. Jackie says Covid changed her opinion on everything. If there is something to celebrate, that is what she will do.

Jennifer is late, not that Melissa cares. And so is Teresa but the ladies wish she would bring a man with her. She brings a real estate agent instead. Jackie and Evan have a man for her and they are excited to tell her about him. But Teresa quickly starts asking about an Evan cheating rumor.

Rumors Flying Around Jersey and A Girls Trip

Teresa goes around asking the ladies if they have heard about Evan. She goes to Margaret because she lives near the gym. Her jaw drops. Jennifer had heard this rumor from Teresa before but she did not have any proof so she ignored it. Teresa is being relentless and won’t stop with the gossip. It is ruining the night without Jackie knowing. In the bathroom, Melissa and Margaret are stunned and do not know what to do. They know they need to tell Jackie but how?

The following morning, all of the husbands have the worst hangovers. Melissa is talking about how she cannot believe her daughter is going to be fifteen. She is even more devastated that she cannot throw the proper birthday party for her. But, they will go to the Shore with some of their friends to make it right. The talk turns to Teresa starting rumors at the birthday party. They flash to conflict between her and Jackie and it has not always been perfect. Marge knows she will have to talk to Jackie in Lake George about the situation.

David’s house has been built but Dolores has yet to move in. Her son, Frank Jr. does live there. He came home during the pandemic and is now using the silence of the home to study for the GMATs. Dolores and David are not getting along at all since she had elective surgery and he is against that.

It is no secret Jennifer’s family is very important to her. Her brother had lived with her mother and father up until he got married a year ago. Apparently, he was a great buffer between her patents when they would bicker. Now, it has gotten beyond and her dad does not even want to be at home. So, she decided he would come live with her. Still, all the kids are concerned for their mother. But, it was the right thing to do because their dad could no longer be a punching bag.

Jackie calls Teresa and says they need to talk before the group goes away. She was told by a friend Teresa was telling a group of people Evan was cheating on her. They agree to meet at Margaret’s because Jackie wants to be on neutral territory. In her confessional, Jackie says the day she had to tell Evan what was being said was one of the worst days of her life. He lost his mind because he could not believe it at all. She leaves her house and heads to Marge’s who is prepping goodie bags for Lake George. They recant Teresa’s horrible behavior over the past handful of years. Evan is so embarrassed that his friends heard the rumors while he was having fun.

Can The Ladies Repair Their Friendship?

Teresa shows up and Jackie breaks down talking to her and wants her to admit this was a lie. Jackie wants to know who started this rumor but Teresa won’t say it. She claims she shared this because a lot of married men have approached her now. Jackie starts screaming that this is a lie and Teresa must admit it. She refuses to do it so Jackie goes one further. She says she heard Gia snorts coke in bathrooms and this sets Teresa off. Kids have historically been off-limits even if Gia is no longer a minor.

The point is it is a rumor. Teresa kept saying what she heard was a rumor so why repeat it? Hence why Jackie never repeated what she has heard about Gia. They go at it and Jackie claims she has the life Teresa wants. Marge tries to intervene but it is too late. The damage is done. This season, the Gorgas are experiencing problems in their marriage. Teresa starts dating again. The women are worried about Jennifer’s drinking problems while Teresa and Melissa continue to go at it.

What did you think of the Season 11 premiere of the RHONJ? Let us know in the comments! Don’t miss new episodes of RHONJ every Wednesday at 9 pm only on Bravo.