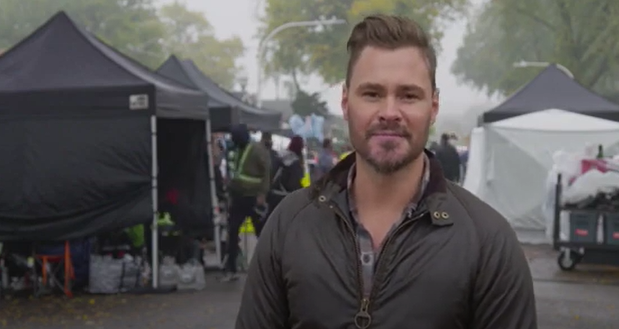 Patrick Flueger is one half of the longest will-they-won’t-they couple in the history of Chicago PD. Flueger’s character Adam Ruzek and Marina Squerciati’s Kim Burgess have been teasing fans with their chemistry since Season 1. During the virtual One Chicago day, Patrick John Flueger talked with multiple press outlets and discussed the Burgess/Ruzek dynamic.

Patrick has always said that he loves working with Mariana and that she is one of his favorite people. Both Flueger and Squarciati have also said on multiple occasions that they hope that Kim and Adam can figure things out and be a couple. Flueger called the couple “complicated” during his recent interviews, but not in a bad way.

‘Chicago PD’ and its couple history

Kim and Adam first made their waves as a potential couple in Season 1. The two were paired up to work the road together and they had serious chemistry. But Adam was engaged to another woman, so they realized that it was not smart for them to be around each other. This continued for the entire season until Adam’s engagement fell apart and he immediately sought Burgess out. They became an official couple in Season 2 and got engaged in Season 3. But although Adam loved Kim completely, he was not ready to settle down and get married. This led to Kim ending their engagement the same season.

Adam and Kim had their struggles dealing with the break-up and in Seasons 4. Kim had multiple short relationships since but nothing long-term due to multiple circumstances. In Season 4, 5 and 6 the pair started working together on the Intelligence Unit and had to figure out how to do that in spite of their history. Kim has had multiple relationships since Season 3 but none have been long-term for multiple reasons. Adam has only had one real relationship since dating Kim, and that was with Hailey Upton in Season 6. But Hailey and Adam called it quits because neither of them felt like their relationship was more important than working with Intelligence.

Kim and Adam reconnected after the Chicago PD crossover, Infection, in Season 7. After spending the night together off-camera Kim found out she was pregnant. The couple decided to co-parent their child and they were excited to have the baby. But a tragedy occurred when Kim tried saving a girl from a trafficking ring. She was beaten badly during the episode and lost the baby. Since then, Kim and Adam again had to figure out their relationship.

Will they finally move forward?

Burgess and Ruzek have settled into a familiar “married old couple” dynamic this season and they spend the majority of their time off together. Adam asked Kim in episode five of this season why they couldn’t try dating again. Burgess told him it would be a bad idea because she wants a family. And she does not think Adam is not ready for that. In the same episode, Kim chose to foster a little girl, Makayla, whom she had helped earlier in the season. Burgess choosing to make this huge change in her life has thrown Adam a curveball he was not anticipating in their relationship.

Flueger said the couple approach situations from different strengths, which cause them to butt heads, but ultimately, he believes they will be together. “I think Burgess’ strength is in her heart, you know. She feels things very deeply. And that’s where she comes from, whereas Ruzek’s strength is in his conviction. And those things don’t necessarily always match up. I think ’til the day they die, if they end up together, if they have a million children together, it is going to be constantly… at the end of the day, they’ll end up you know, butt-butt-butt[ing heads] and then, you know, come together at the end of the day. That’s how I see it.”

Squerciati made a similar statement after episode five when she talked about the Burzek relationship. “I feel like that’s the show — for Burgess and Ruzek to figure out their problems. Then the show’s over for us. I think it’s lovely. They have a really incredibly loving, complicated relationship that I think has really strong bones if only they can get over all the bad things that have happened to them.”