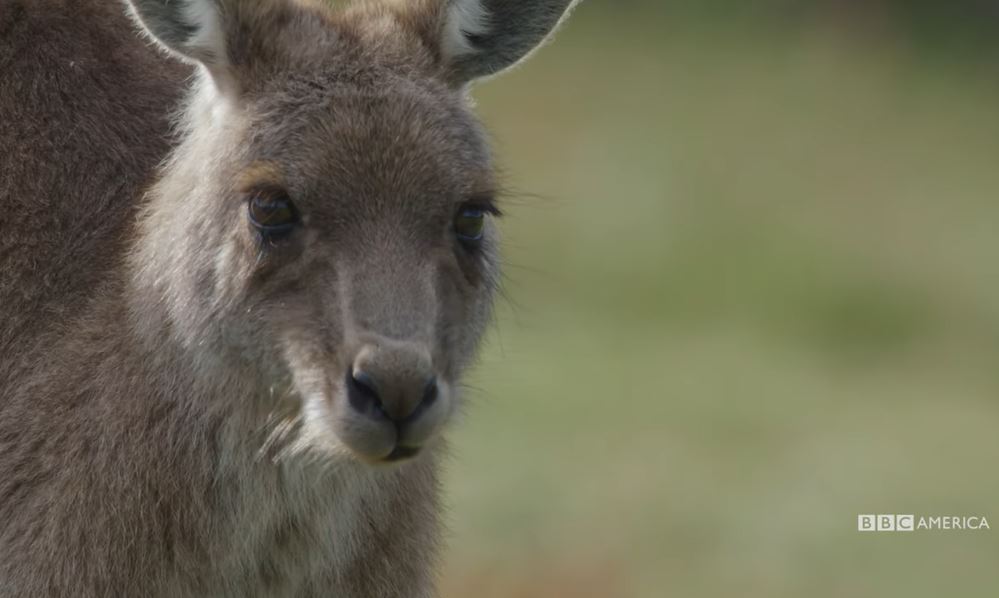 When a dominant male is challenged, the boxing gloves come off.

In TV Shows Ace clip below, you can see hw an upstart male is taking on an established alpha male with a Sister Wives-sized posse of marsupial mama kangaroos who frankly look completely bored with all the male kangaroos posturing.

The circle of life continues as male kangaroos show us that the mating habits of their lot can mimic other mammalian species. All of this showy violence is typical in the battle for the stronger male breeding rights battle that wages every spring.

About A Wild Year on Earth coming episode this weekend

Narrator Laura Carmichael (Downton Abbey) takes us to the grassy plains of eastern Australia where springtime’s arrival means a breeding boom for kangaroos.

She notes that the boss of a mob flexes his chest muscles standing in an upright stance, as this spring he’s at the top of the hierarchy and doesn’t like the way a subordinate male kanga is prepping his boxing gloves and literally drooling over his harem of females.  The boss reminds them all of his dominance by marking his territory with urine.

But despite this marking of territory, the younger male is paying no heed as he bravely inches closer to the females. This invites a cage match with the big fellow.  The boxing stance is assumed as the two males go after each other.

Carmichael notes that once the authority of the alpha kangaroo is affirmed he immediately focuses on wooing the females. She says: “Although kangaroos breed all year round spring’s fresh protein-rich grass activates a production line of babies.”

The fifth and penultimate episode, A Time of Activation, is set in September.

This new episode of the six-part series narrated by Carmichael premieres Saturday, February 20th as part of the weekly programming event Wonderstruck, celebrating the elegance and power of our planet.

Seasonal swings activate change across the globe as the heat rises in Southern Africa where the dry season deepens. A hungry pride of lions attacks animals desperate for water and hippos are forced into ever decreasing pools.

Produced by Northern Pictures, the series follows the planet’s most spectacular events of migration, rebirth and transformation over the course of a year. Throughout the series, Carmichael reveals how the natural world and its creatures are connected to the Earth’s seasonal patterns, from melting icebergs in the Arctic, to one of the largest Asian elephant congregations in India, and across the seas to the annual coral spawning on the Great Barrier Reef.

Past Episode Descriptions – Available on AMC+

Episode 1 – “The Year Begins” – Now available to stream on AMC+

The start of the year kicks off in the realm of the Polar Bear, the Arctic winds plunge the Northern Hemisphere into winter. Creatures, miniscule and magnificent are challenged by the conditions. While in the tropics, animals and humans have a different response to the season.

In March, the longer days trigger dramatic events across the natural world. Whooper Swans overwintering in Japan are called northward. In India it’s time for one of the largest congregations of wild Asian elephants known on Earth.

May sees North America suffer violent tornadoes which tear across the plains as wild mustang herds gather on the grassland. In South East Asia, the largest migration of rain on the planet is underway as monsoon season arrives and inundates the Subcontinent

A Wild year on Earth airs Saturdays at 8PM on BBC America.