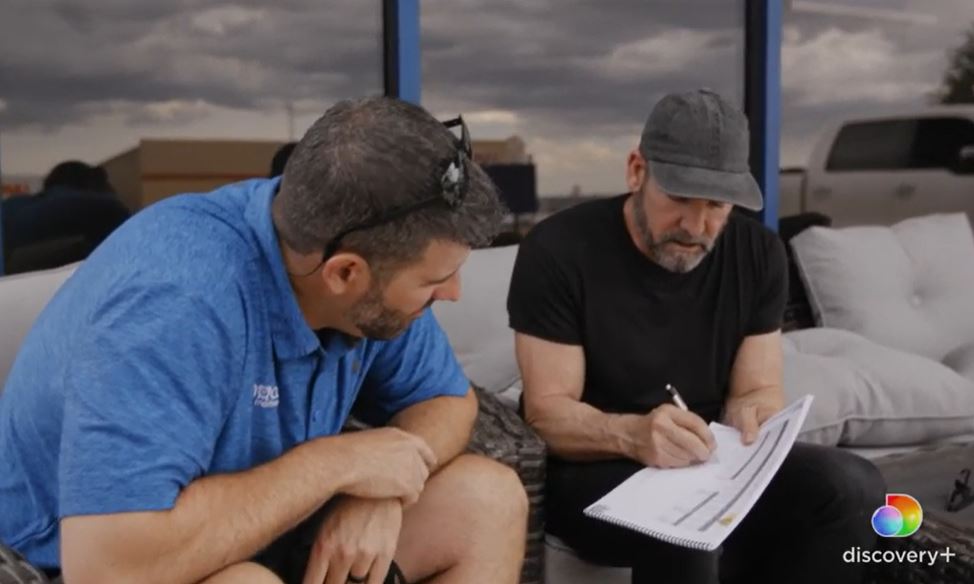 On the next edition of Undercover Billionaire streaming on discovery+ this Wednesday, Grant Cardone disguised as Louis Curtis takes us inside his wheeling and dealing as he shepherds local businessman Matt Smith though a big real estate deal.

Mind you, Grant (Louis) has little to no money.

And as the two men set out in a rented RV, and we hear directly from the horse’s mouth just how someone’s rent will get jacked up whenever a new player decides to purchase the “investment” of an apartment building.

You may want to throttle him, but Cardone is masterful at the salesmanship technique needed to convince people to give him their dough for a big real estate deal.

Cardone says: “Big real estate is not just for billionaires. If you can find the right project in the right location and then put together a group of investors
you could get a piece of the action without putting up a dime.”

Cardone is on a roll as Louis. He has Matt sold on anything he brings to the table. TV Shows Ace exclusive preview clip below reveals just how deft a salesman Cardone actually is.

Grant—as Louis—says of the whale real estate deal called Kona Kai: “This whole thing’s gonna take 40 days or less. I want to be done maybe even 30 days,
look… I’m playing a game here, okay? I’m using two streams, two multi-million dollar ideas…the promo company that I know Pueblo
needs, and the Kona Kai apartment deal which is a multi-million dollar score if I can get it under contract.”

Okay. So to get it under contract, he needs money. And now enter Matt, the man with the Pueblo whale investor connections.

Grant does his fast talking and Matt is pumped. So much so that he rented an RV all tricked out to go on a mini vacation.

Cardone describes Kona Kai as “a flagship of this community.”

He says: “They just have a vibe to them that everybody knows and everybody at some point in life has been to so we’re heading to the property to see what kind of shape it’s in. The cameras have to hang back while we kick the tires.”

The two men note the Kona Kai property has been well taken care of and maintained, crucial to a big deal like this one.

Cardone adds: “It’s got income, it’s got built-in customers, it’s got appreciation, it’s got tax write-offs…if I can raise the rents by 200 bucks a unit
which is not a lot, 154 units that would be $369 000 of new income on a property.” As he debarks the RV he says:  “Nothing gets me more excited than a piece of real estate that’s already producing income.”

Noting he needs money, he adds: “I don’t have any time to waste. Louis Curtis going to put together some partners that have money that will pony up. I’m gonna write an offer let’s see what they do then I’ll come back to you and see what we got to do to put the money together.”

He and Matt plot world domination and raised rents as a side casualty in Pueblo. Tune in to see how this scheming actually works!