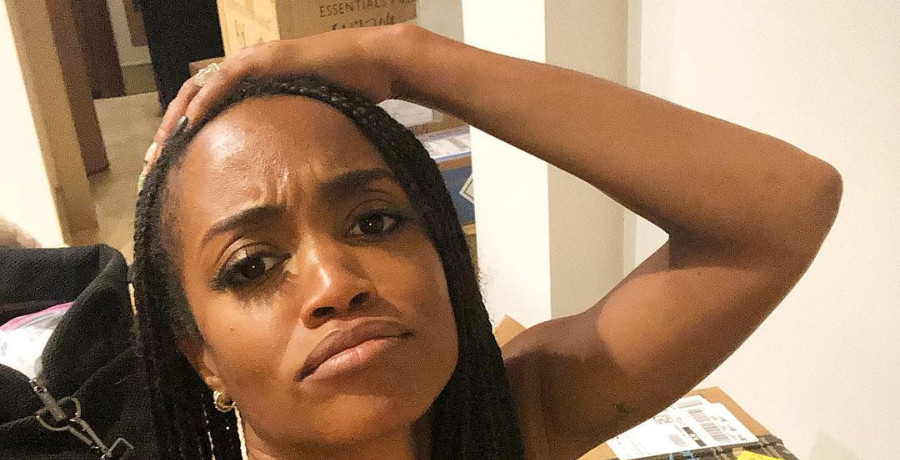 Rachel Lindsay is not happy with Hannah Brown. On her Higher Learning podcast last week, Rachel implied that Hannah Brown got off easy last summer. After saying the “N-word” on camera, Hannah Brown gave a less-than-sincere apology, in Rachel’s eyes.

To make matters worse, Hannah Brown has now deleted a controversial photo from her Instagram hoping no one would notice.

When Hannah Brown came under fire for saying the “N-word” in a song, Rachel Lindsay reached out. Unfortunately, it seems that Hannah didn’t follow through with her original apology idea. Rachel advised Hannah to give a video apology, but Hannah decided not to at the last minute. Instead, she posted an apology note on her Instagram Stories.

As Rachel pointed out, the IG Story was only visible for a short amount of time.

Haters might blame Rachel for Hannah Brown’s past behavior getting dredged up again, but it was actually Chris Harrison who did the dredging. During his explosive interview with Rachel Lindsay on Extra, Chris Harrison named-dropped Hannah Brown in defense of Rachael Kirkconnell.

Twitter user @TeaAndRoses21 posted the photo from Hannah Brown’s Instagram. Us Weekly reports that the photo was taken at a 2013 “Tuscaloosa Belles” event.

When Hannah Brown got caught uttering the racial slur, she vowed to do better. In fact, she recently spoke out to encourage Bachelor Nation to “be better” about racial issues.

@TeaAndRoses21 discovered that Hannah Brown deleted the questionable photo without saying anything about it. Not only that, the photo was removed moments after Hannah Brown posted her thoughts about the Chris Harrison scandal.

The incident came to Rachel Lindsay’s attention during an AMA (Ask Me Anything) session on Reddit. Rachel knew about the photo but not that Hannah removed it. When a fan brought it up, Rachel’s first reaction was to write, “Wait Seriously?”

Rachel then used Hannah Brown’s own words against her, writing, “We do not ‘learn and grow’ from [running away.]” The first Black Bachelorette also reminded people that “actions speak louder than words.”

And it appears she doesn’t like what Hannah Brown’s actions are saying.

There has been a lot of speculation about who will replace Chris Harrison during his break from hosting. But during her AMA, she addressed another issue: will she leave the franchise over this? Rachel Lindsay has been mulling her place in Bachelor Nation for a while. She admits that she needs to “separate herself” from the franchise for a bit. However, she loves hosting a podcast – Bachelor Happy Hour – with fellow alum Becca Kufrin.

It unclear if Rachel Lindsay will leave the franchise behind. Or if Hannah Brown will explain her reasons for quietly deleting problematic photos from her social media instead of addressing them.

ABC has yet to release any info on the upcoming Bachelorette Season 17. Katie Thurston and Abigail Heringer from Matt James’ season are the frontrunners, but the network may throw in a surprise casting.

There are still a handful of episodes remaining in The Bachelor Season 25, Mondays on ABC.