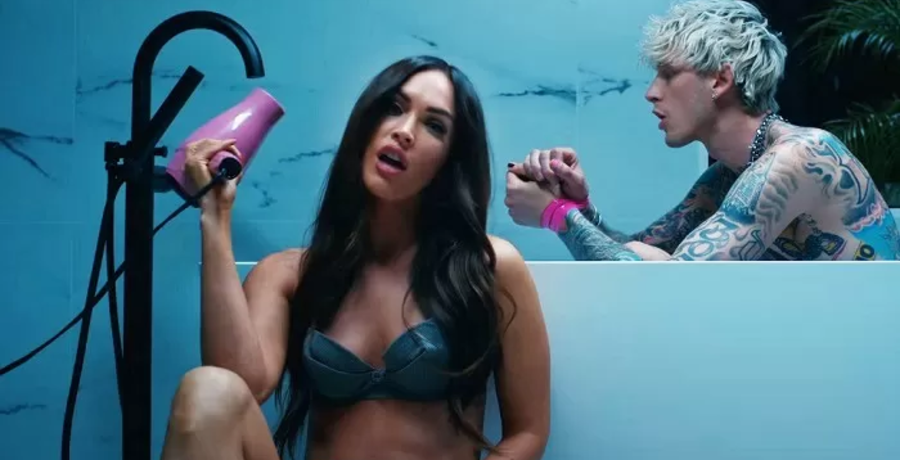 Megan Fox and Machine Gun Kelly became this generation’s Angelina Jolie and Billy Bob Thornton. The couple celebrated Valentine’s Day in the wildest way ever. The “My Bloody Valentine” singer takes his song seriously. He revealed that he wears his girlfriend’s blood around his neck.

These two clearly sought inspiration from the original Goth couple of the ’90s. They went full-on Angelia Jolie with their matching blood necklaces. This comes after Megan called the rapper her “twin flame.” These two are crazy about each other and it shows.

But their latest Instagram posts had some fans gagging.

On Sunday, February 14, Machine Gun Kelly gave a relationship update. He wants everyone to know that he’s still in love with Megan Fox. He’s got it bad for the Jennifer’s Body star. The 30-year-old singer, whose real name is Colson Baker, keeps his girlfriend’s blood around his neck. He posted a tribute to the actress on the day of love.

“I wear your blood around my neck,” MGK captioned the slideshow of photos alongside the stunner. He included the “kitchen knife” and a “drop of blood” emojis in his post.

“there goes my heart manifest outside of my body,” the brunette beauty wrote in her Instagram post. “draped in the towering silhouette of a most unusually handsome boy.”

She continued her post by sharing a special poem for her love. Megan admitted that while “the journey will likely be perilous” she feels “there is no destination without him.” Megan concluded her post by saying Happy Valentine’s Day to her “rehab Barbie.” Machine Gun Kelly previously revealed that Megan encouraged him to go to rehab for his substance abuse.

This couple does not shy away from public displays of affection

Megan Fox went public with her relationship with Machine Gun Kelly in July 2020. The two met on the set of their upcoming movie, Midnight in the Switchgrass. Megan filed for divorce from estranged husband Brian Austin Green in November. At the time, the pair were photographed together in public.

Shortly thereafter, Megan and MGK posted photos of each other on Instagram. They have been inseparable since. In a joint interview with Vanderpump Rules stars Lala Kent and Randall Emmett, the couple admitted they had feelings for each other from the start. Megan feels that they’re just more than soulmates — they have “two halves of the same soul.”

The pair has also dodged the engagement rumors. Megan was spotted wearing a ring that simply said “F*** you” to the paparazzi. That came after the media wondered if she was wearing a ring on that finger. While they’re clearly in love, they don’t have a desire to settle down anytime soon.

What are your thoughts on Megan Fox and Machine Gun Kelly’s relationship? Sound off below in the comments.