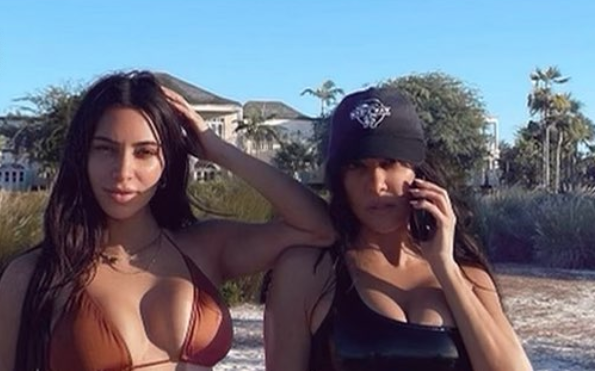 Kim Kardashian shared a new photo on Instagram. Like always, the star looks great. Not only that, but she included a caption that has to be a joke…right?

Kim Kardashian posted a new photo on her Instagram and she is looking amazing. She is wearing a totally nude bikini. While that may look weird to the normal eye, Kim Kardashian is rocking it of course. She is holding her hand up in front of her face, which goes right along with her caption. She writes “I’m really shy.”

Of course, being on TV for years and making appearances, Kim is probably the opposite of shy. Not to mention she is posing nearly nude on social media in this exact post.

Of course, fans called her out on this in the comment section:

Of course, this isn’t the first time Kim has been in a bikini lately. She did a Valentine’s photoshoot with two of her sisters where they all rocked red bikinis. The photos included Kim, Kendall Jenner, and Kylie Jenner.

She shared a photo of herself with her two sisters a long time ago. Of course, they look nothing like they do now. She writes “How it started vs. How it’s going.”

Next to that is all the sisters showing off their bodies together looking amazing for Skims Valentine’s Day.

Of course, Kim’s whole world doesn’t revolve around bikinis. She is also dealing with a divorce from Kanye West. Apparently, Kanye is ready to go through with the divorce right this second. However, Kim is trying to wait until Keeping up with the Kardashians starts. Apparently, fans will get an inside look at their relationship falling apart during the new season.

“Kanye is also completely done with the marriage and is moving on. He doesn’t care what Kim’s priorities are with holding off on a divorce announcement,” a source says about the couple.

Hopefully, whatever happens between the couple they are able to learn to co-parent so all four of their children stay happy. They seem to be great parents so it shouldn’t be an issue.

Do you think Kim Kardashian is shy in real life? Let us know in the comments below. Come back to TV Shows Ace for more news on all of your favorite Kardashian family members.