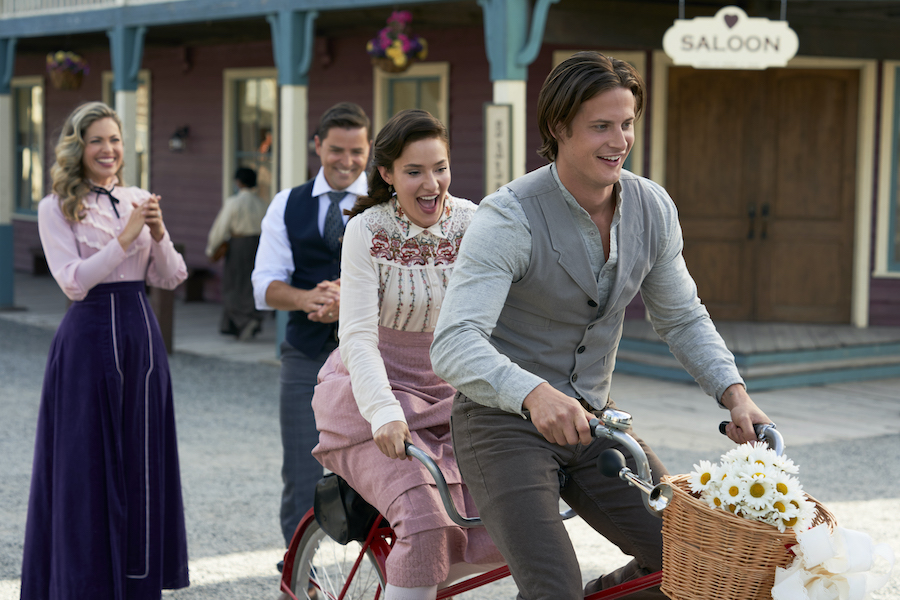 Hearties, ready to venture into Erin Krakow’s happy place? When Calls The Heart Season 8 will premiere soon, on February 21. Moreover, the cast has already given some hints of what to expect, thanks to this weekend’s video, aired first on Hallmark.

Are you ready to return to Hope Valley?

When Calls The Heart Season 8 Includes Some ‘Big Choices’

Over the weekend, Hallmark released an On Location preview for When Calls The Heart Season 8. What did it have to reveal about the upcoming season?

The video starts out with Erin Krakow introducing herself and declaring, “It is truly my happy place getting to be here in Hope Valley, surrounded by some of my favorite people, getting to do this thing that I love.”

This is a very strong statement, from the actress who plays the lead, Elizabeth Thatcher Thornton. In the year 2020, no one knew if they could pull off Season 8. WCTH was one of the first productions to get going, after the coronavirus quarantine.

They were venturing into new territory, filming during a worldwide pandemic. Filming in Vancouver, there were quarantines, multi covid tests, masks on at all times, unless in front of a camera and working in pods.

Despite all of the obstacles, this preview demonstrates that Hope Valley is a place of love. In addition, like the current day issues, there are challenges this season. Pascale Hutton (Rosemary Coulter) shares that these challenges “deepen” the characters.

When Calls The Heart Season 8 Introduces The Canfields

Minnie is concerned about their daughter, Angela, who is visually impaired. They also have a son, Cooper. The Canfield children are played by Viv Leacock’s real-life children, Vienna and Elias.

Erin Krakow shares that Elizabeth is determined to find a way for Angela to be with kids her own age. Can she convince Minnie to trust her?

Will there be romance in When Calls The Heart Season 8? Absolutely! Kevin McGarry (Nathan Grant) assures hearties that there is romance “everywhere you look.”  This includes the love triangle “resolution.” Elizabeth will choose between Nathan and Lucas (Chris McNally). Moreover, she will start courting!

But, there has been another romance simmering over the past few years. According to Pascale, the surprise romance that will win over hearties is between Ned Yost (Hrothgar Mathews) and Florence Blakeley (Loretta Walsh). There is a bit of an “attraction.”

Jack Wagner (Bill Avery) shares that there is a “current of love that flows” through this season. This should be expected, as this Hallmark show does have the word “heart” in it. Fans would not expect anything less.

When Calls The Heart Season 8 promises to be a “ray of light” in the midst of uneasy times. The premiere is on Sunday, February 21, at 9 p.m. Eastern, on the Hallmark Channel.

Isabel Roloff Gets Real With Fans, Opens Up About Forgiveness
Savannah Chrisley ROASTED For Being Spoiled & Privileged
‘LPBW’ Jackson Roloff Has What It Takes For His Own Show?
Are Kim Kardashian & Kanye West Co-Parenting Successfully?
‘General Hospital’ Leak Revealed About Jason And Carly’s Wedding?