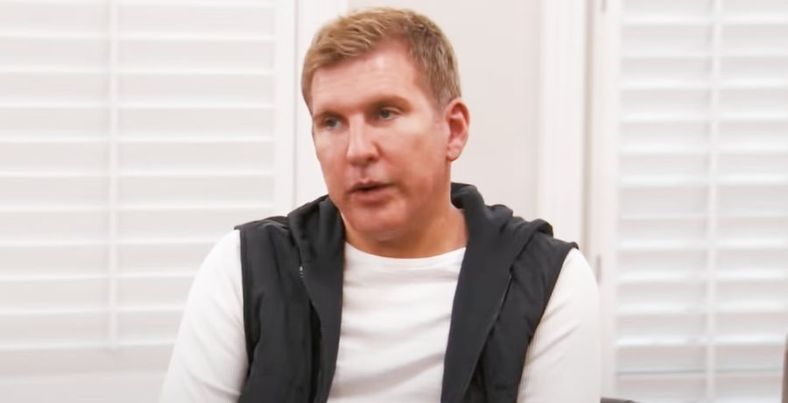 As everyone who is a fan of the show knows, Todd Chrisley is all about his looks. He unapologetically flaunts his materialistic lifestyle and gets Botox on the show. In fact, he and Nanny Faye got Botox together. That’s why his recent Valentine’s picture drew fans to comment. His children are also about their appearances with Savannah owning her own beauty line.

On the post with Julie to the Chrisley Knows Best account, it is captioned, “Happy Valentine’s Day ya’ll.” Julie is making the kissy duck face and looks pretty while Todd is scowling and pursing his lips. This prompted one commenter to say, “[sic] July looks beautiful as always. Todd, lose the scowl and smile.” Another said, “Todd I love y’all but did you suck a lemon? J/K failed Botox?”

What Did Fans Say Of Todd Chrisley And His Appearance

Todd Chrisley is quick to fire back when someone insults him, but since this post is relatively new, he hasn’t come in hot yet. One fan started by saying she only wanted to say it because she loved him. Then she told him, “don’t do your lip like that.” Another said, “Julie,” with a heart emoji, and “Todd,” with an upside-down smiley. “More realism, less Botox or surgery.” One follower said, “Todd if you do your lips like that you’ll get lines like a smoker.”

While some mocked him for his duck lips others sent their love. They wished the couple a Happy Valentine’s day right back. Nanny Faye showed off her photography skills on the latest episode. Nanny tells Francis she wants her to take a duck face picture with her. She shows her how to purse her lips. Then Todd shows up with bananas and condoms to educate them on the birds and the bees. In a Nanny heavy episode he also taught her what DTF meant.

The Reality Star Had More Than One Valentine

Todd Chrisley also posted his other Valentine, Nanny Faye, on his Instagram. He captioned it, “When your valentine shows up with her mink and bedroom shoes.” Nanny is looking good and ready for a fun Valentine’s day in pink cow slippers. Nanny is very much into talking about love. She recently wrote a story for a publication Off The Rocker. She said it was loosely based on her life. When she read the story to Todd he was appalled at how risque it was. She and Francis also took a burlesque class to get ready for their cruise.
That class was what prompted Todd to show up with condoms.  What do you think about Todd Chrisley’s Valentine picture? Do you think Todd will respond to the comments about his appearance? Comment with your thoughts below.

Would Michael Allio Accept An Offer To Be ‘The Bachelor’ Next Season?
Khloe Kardashian STUFFS Massive Booty In Skin-Tight Leather Pants
Was Tammy Slaton TRYING To Kill Herself In Deleted Instagram Post?!
Wissmanns & Duggars Have Been Friends A LONG Time: See Old Photo
Chris Harrison Responds To Matt James, Rachael Kirkconnell Dating, Plus Is He Watching Katie?