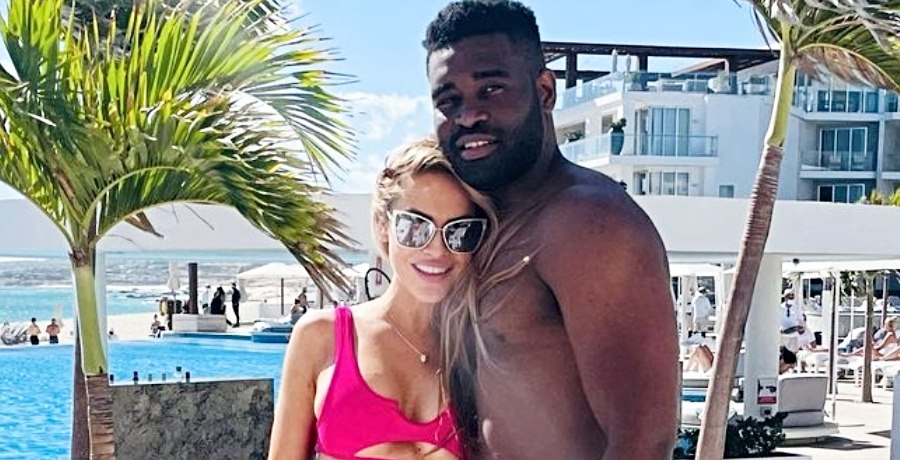 Chrishell Stause and Keo Motsepe met on the set of Dancing With The Stars Season 29. However, few people suspected their friendship was something more. Since going public with their relationship, they seem quite happy.

And after all the romantic rollercoasters Chrishell rode over the past few years, her relationship with Keo seems like a dream come true. The cute couple spent Valentine’s Day together and posted cute photos on their Instagram pages.

“My Valentine 😍 Happy Valentine’s Day!” Chrishell captioned a photo of the couple and Chrishell’s dog.

Selling Sunset Stars Are So Happy For Chrishell And Keo

Chrishell Stause’s co-stars are so happy that she found love with someone new. Mary Fitzgerald said that Keo could even make appearances on upcoming Selling Sunset seasons. However, Mary also confessed that she was concerned about the new romance at first.

“They are so cute, I was concerned in the beginning as I was like, I don’t want her heart being broken again…” Mary told The Daily Mail, referencing Chrishell’s painful split from actor Justin Hartley. “But Keo is awesome and Chrishell is just over the moon.”

Chrishell’s ex-husband Justin Hartley moved on long before she did, and the Selling Sunset star admitted that stung.

“I feel like anybody would be heartbroken to see how quickly or easily you are replaced; of course that’s going to sting,” Chrishell told PEOPLE back in September.

But hearts heal in time and people move on. Chrishell brought Keo home for Christmas and he really seemed to fit in with the rest of her family. He even wore matching pajamas with everyone!

The Happy Couple Met On DWTS In The Fall

After Dancing With The Stars ended, many fans speculated Chrishell and her professional partner Gleb Savchenko were romantically involved. They even went as far as to accuse Chrishell of ending his marriage. However, she adamantly denied those claims and made her relationship with Keo public shortly after. After a high-profile divorce, she really did not want to be involved with another dramatic breakup storyline.

Keo’s mom died at the beginning of January, and Chrishell was there for him. She too knows just how painful it is to lose a parent, and their grief brought them closer together.

“Keo’s hanging in there,” an inside source told Us Weekly. “He’s getting a lot of support from friends, and of course, Chrishell. They’re pretty much inseparable and spending a lot of time together.”

It may be a little too soon to tell, but it really seems like Keo and Chrishell could be together for the long-haul. Do you see this turning into a long-term romance? Let us know what you think in the comments!

‘Sister Wives’ Season 15 Episode 9 Recap: April 11
Mike Johnson Speaks Out About Being Dragged For Dating Outside His Race
‘The Bold And The Beautiful’ Spoilers: Hope Makes A Shocking Discovery
Does ‘Return to Amish’ Jeremiah Raber Finally Find His Father?
‘Come Dance With Me’: Jenna Dewan Set to Judge on the CBS Reality Show