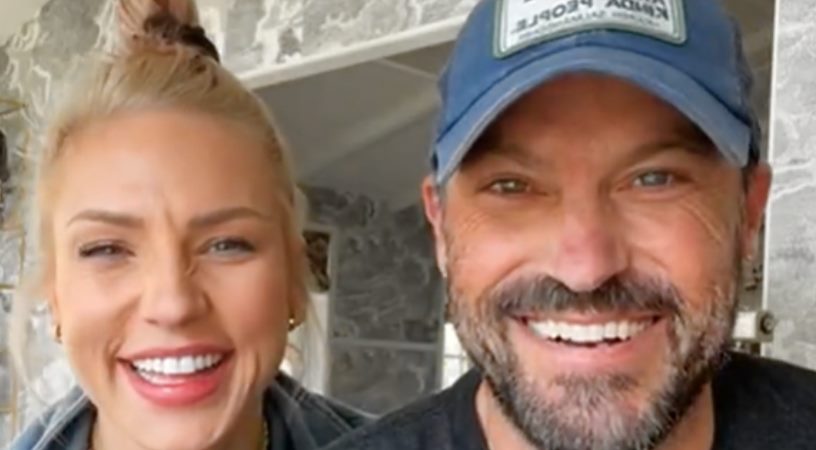 Love is in the air! After splitting with his wife Megan Fox, Brian Austin Green is seeing someone new these days. And it’s gotten serious rather quickly. After making his relationship public with Dancing With The Stars pro Sharna Burgess, Brian Austin Green took to Instagram on Valentine’s Day to express his feelings.

“This has been kind of a weird year for me so what an amazing Valentine’s Day this has been,” Green said in his video. “Sharna is a really amazing, considerate, loving, kind person. I kind of feel like when you put yourself in a space where you on some level decide that you’re gonna surround yourself with people that help you move forward on a path instead of pulling you back, that they do that.”

Sharna chimed in and had plenty of nice things to say about her new beau too.

“This one took me completely by surprise,” the dancer said in the clip. “I’ve never known a man like him.”

Sharna accompanied Green on a trip with his kids to Big Bear, California. Green posted a photo of him and the kids hanging out in the snow with the location set to “Big Bear.” Sharna presumably took the photo.

“It was amazing but we did make the grave mistake of going on a weekend. … At one point it was a three-and-a-half-hour wait to get into a restaurant and they weren’t taking reservations,” she quipped in the Instagram video.

“We went to a liquor store and I made liquor store steaks,” Green revealed. “They had a meat department which was the last freezer down at eye level on that rack and they had some steak and ground beef and I made steaks that were about paper at the point when they were done.”

He went on to say that the kids were super happy and it was still a great trip overall. It really seems like this is a match made in Heaven.

It’s clear that Sharna Burgess is falling just as hard. She recently posted a sweet message for singles on Valentine’s Day.

“For all my single humans heading into Valentine’s Day tomorrow… This ones [sic] for you. I know I know… the day can really suck can’t it. But it doesn’t have to! Even though this year is beautifully different for me, I appreciate, remember and know how V day can feel especially if you’ve simply decided it sucks,” the dancer wrote. She went on to encourage fans to stay true to themselves and wait for love to find them.

It seems that Sharna is actually taking her own advice. Few people linked her to Brian Austin Green before they went public with their relationship.

Are you happy for Sharna Burgess and Brian Austin Green? Do you think they make a great couple? Let us know in the comments.