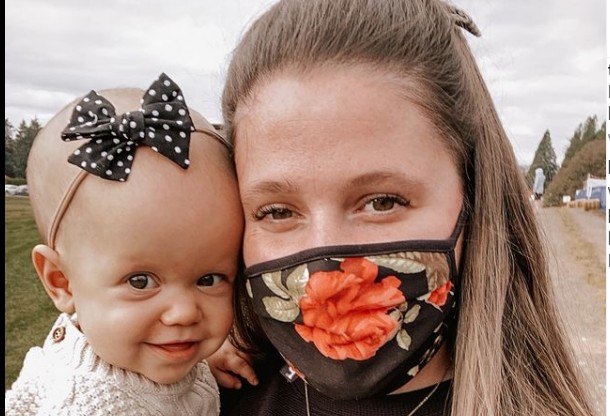 Tori Roloff revealed a couple of photos of Jackson and noted his “pure happiness” as he played in the snow. Recently, Tori shared that with the weather this year they don’t have to go far to find the fun stuff. But, they also live in an area where proper slopes and facilities exist. Actually, Audrey, Tori’s sister-in-law takes her kids out quite often.

Audrey Roloff already teaches her daughter Ember to ski. It seems that she beat cousin Jackson to the activity. But when Audrey took baby Bode skiing strapped to herself, fans slammed her for it. In fact, her post received a lot of harsh criticism as people felt she endangered Bode’s life. She claimed that she feels safer skiing with Bode than walking up the stairs at home. Still, bad things happened to other people on the nursery slopes.  However, Tori’s photos of Jackson reveal him enjoying himself quite safely.

In her first photo that Tori Roloff shared in Instagram Stories this weekend, Jackson lay in the snow. He made himself into a starfish and swept away the white stuff. All bundled up in his thick jacket, fleece, knitted hat, and tiny boots, he looked snug and warm. The Little People, Big World star captioned it with, “The look of pure happiness.” In her next slide, Jackson gave that sweet smile that TLC fans know so well.

As you can see in the photo above here, that’s a really happy-looking child. If Tori Roloff posted that on her main Instagram page, likely thousands of “cuteness overload” comments would roll in.

Little People, Big World fans just adore seeing photos of Jackson and Lilah. Country Living noted that ever since fans first set eyes on Jackson, they thought him the most adorable child. And now, his little sister Lilah also melts the hearts of Tori’s many fans. Tori often tells her fans that one of her top priorities is knowing that her kids know they are loved and safe.

When Lilah recently gave up her binkies, Tori Roloff pointed out that her daughter didn’t need them. All she really needs is that feeling of love and safety. Clearly, she and Zach raise Jackson and Lilah as kids with a healthy zest for life. She’s not a helicopter parent, and lets the kids play at things that bring many photos of “pure happiness.” TLC fans just hope she keeps them coming. And they deeply hope that if LPBW ever ends, that she and Zach feature with their adorable kids in some sort of spinoff.

What do you think of the cute pictures that reveal Jackson looking so happy in the snow? Sound off in the comments below.