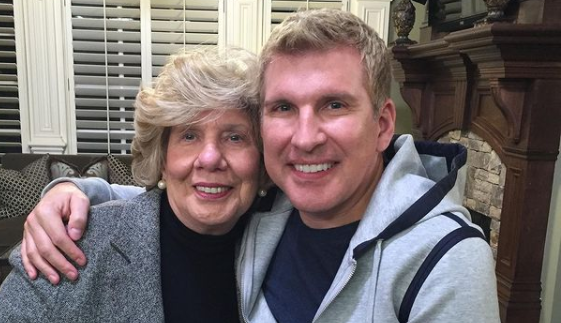 Whoever said that a person can only have one valentine? Well, Todd Chrisley either didn’t get the memo or he just doesn’t care (the second is more likely). Today on Instagram, Todd not only celebrated his love for Julie, but he showed off his love for Nanny Faye too.

Nanny Faye is deeply loved for just how much she does not care and lives life on her own terms. This woman is not the repressed southern matriarch that many people expect. Instead, she says what she thinks, does what she wants, and never apologizes for being herself. Todd’s picture of Nanny Faye today showed her dressed in her mink coat and hat because for those of you who don’t know, it is cold and snowy in Nashville today. But since Nanny Faye is not one to ignore her comfort, she chose to wear her bedroom slippers. And Todd labeled her style as #class.

Fans constantly comment on posts and videos with Nanny Faye that she is the grandmother they all wish they had. Part of what makes the show so special is the open and frank relationship that all the family members have with each other. Todd and Faye can talk to each other about anything whether it be difficult, funny, painful, or happy. The last episode on Chrisley Knows Best demonstrated this perfectly.

The Nanny Faye centric episode started with Faye traumatizing Todd with a romance story that she wrote for her senior living book Off the Rocker. Faye even claimed that the story was “loosely based on her life,” to which Todd told her to leave the house immediately. Later in the episode fans got to see how Faye and her sister Francis are getting ready for their upcoming cruise. Turns out they are getting ready by taking a burlesque dance class! Savannah and Julie got a front-row seat to experience all the glory of Faye and Francis turning it up.

After hearing about the dance class though Todd decided “the talk” with Faye and Francis. He tried to educate them on STD prevention and new lingo like “DTF.” Then Todd gave each of them a banana and a condom to practice with, but it turns out though that Francis didn’t need Todd’s help at all.

But as much as Nanny Faye might drive Todd absolutely crazy and embarrass him to no end, he loves her immensely.

Nanny Faye can do no wrong when it comes to fans of the show. So many people have commented on Todd’s photo and are showering Faye with love. One fan told Todd “we see who really has the swag and drip!” because everyone knows Todd loves fashion. While another joked that, “She is the Diva of the Chrisley Family!” although all of them might want to claim that title.

Season 8 of Chrisley Knows Best is nearing the end of its run with only two more episodes left. But there is no word yet on whether or not the show will be renewed for Season 9.

So check back into USA Network on February 18 to get your Todd and Nanny Faye fix.

‘Vanderpump Rules’ Season 9 Will Be More Exciting Than Fans Think
Roloff Farms Construction Resumes: Will It Complete Before Amy’s Wedding?!
‘Uncoupled’ On Netflix: Release Date, What We Know Right Now
Wait, What? Does Isabel Roloff Plan To Raise Her Baby In A Van?
Lisa Rinna Sued For Copyright Infringement: What Did She Steal?