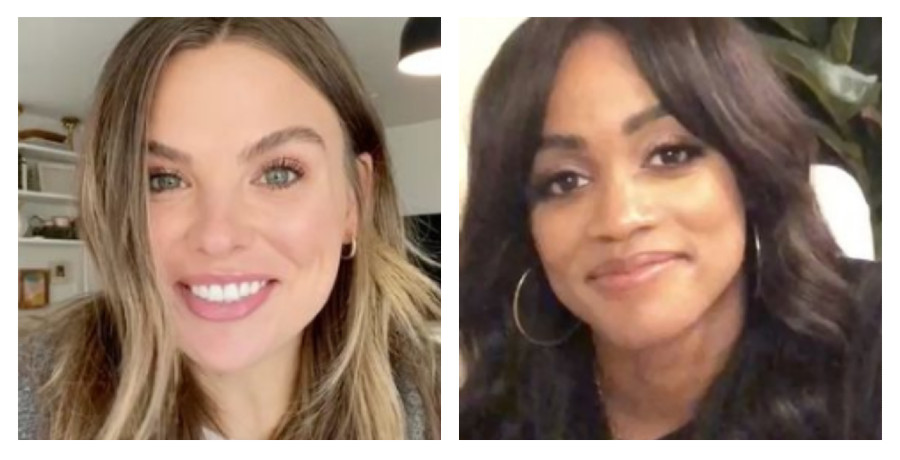 At the height of racial tensions in the spring of 2020, Bachelor Nation alum Hannah Brown said the “n-word” on her Instagram Live. What immediately followed was denial that it was her saying the word. She claimed it was her brother instead.

However, after laying low for two weeks, she was back with an apology and a promise to “do better.” Chris Harrison, the host for the various Bachelor franchises, invoked Hannah Brown’s name during a discussion about race with former Bachelorette Rachel Linsday earlier this week. Is Rachel still salty about Hannah Brown saying the “N-word?”

After Hannah Brown’s apology tour for saying the “N-word,” Rachel Lindsay called it “insincere.” In fact, she said the Alabama native wouldn’t learn or change from the incident.

Rachel Lindsay hasn’t spoken publicly about Hannah Brown since the incident in May. However, she has been extremely vocal about the lack of diversity and issues behind-the-scenes of The Bachelor/ette.

But that all changed on Friday’s episode of Rachel’s podcast, Higher Learning. The lawyer gave her side of the story of her interview with Chris Harrison. On the podcast, she reacted to Chris bringing up Hannah Brown’s casual utterance of “N-word.” During the interview, Chris Harrison said that Hannah Brown wasn’t given the “grace” she deserved.

Based on her comments, Rachel Lindsay is still feeling a little salty about how easily it was brushed under the rug. She pointed out that Hannah Brown’s apology after a two-week absence didn’t stay up on her Instagram for very long.

Us Weekly transcribed the comments Rachel Lindsay made on her podcast about Hannah Brown. Read them for yourself and see if she still sounds peeved at Hannah:

It seems that other members of Bachelor Nation didn’t learn anything from the talks about racism sparked by Hannah Brown using the “N-word.”

On her podcast, Rachel Lindsay also questions the timing of Chris Harrison’s Wednesday apology. The interview aired on Tuesday on Extra. Rachel Lindsay pointed out that Chris Harrison was “fine” with the chat. It wasn’t until Wednesday that he apologized for defending Rachael Kirkconnell from allegations of racist behavior.

By Saturday, Chris Harrison chose to “step aside” from his hosting duties due to the public outcry for what he said and how he spoke to Rachel Lindsay during the interview.

Well, maybe one person did learn. Hannah Brown took her to Instagram Stories with her thoughts on the Chris Harrison controversy. In a series of five videos, she laid out her advice for Chris Harrison and others: to listen and allow yourself to be held accountable.

In this clip, she says that Bachelor Nation has to “be better” going forward.

What are your thoughts on all of this? Is Rachel Lindsay right to still be upset with Hannah Brown? Did Chris Harrison do the right thing by taking a break from his role as host? Leave a comment down below with your thoughts.

Matt James’ journey for love on The Bachelor continues every Monday on ABC.

If you’re a fan of Bachelor Nation shows, join our Facebook group to connect with other fans.