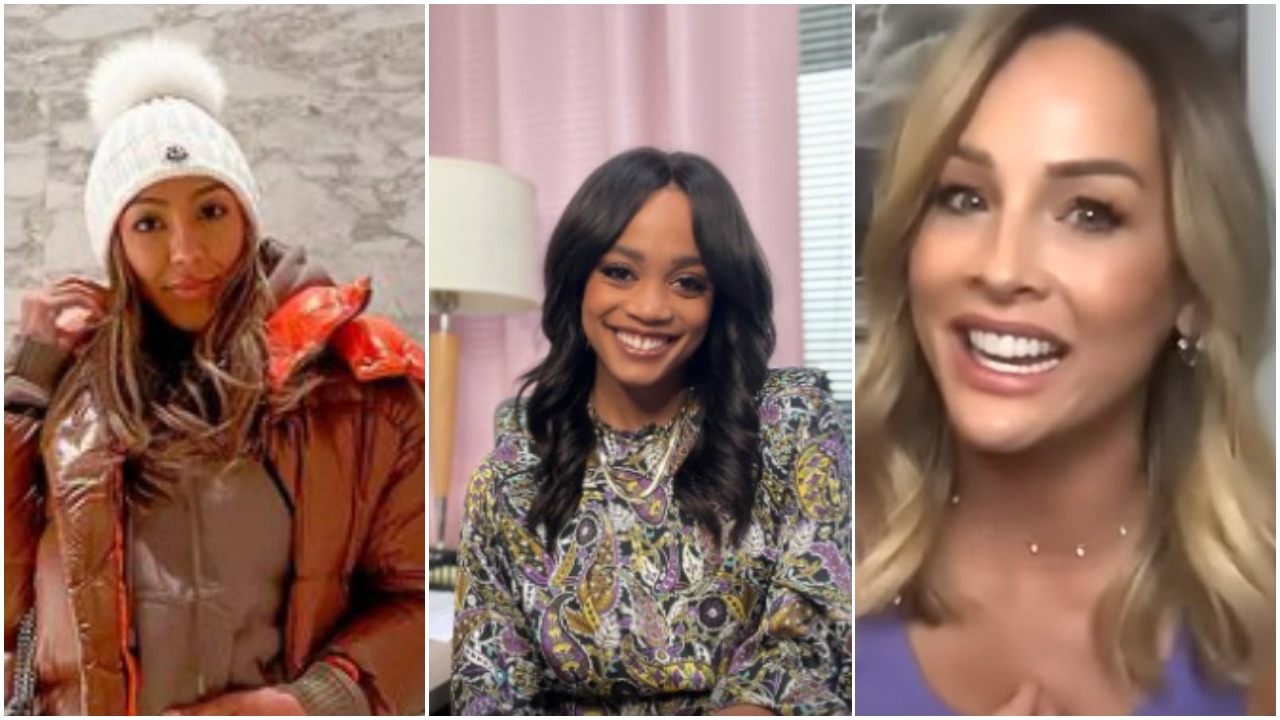 Bachelor Nation has been in an uproar the past few days following an interview Chris Harrison gave to Rachel Lindsay. The interview discussed controversial contestant Rachael Kirkconnell. She is a front-runner on Matt James season of The Bachelor. And, unfortunately past actions have led her to be accused of racist actions. When Chris gave the interview, Rachael Kirkconnell had not yet released her own statement regarding the matter. Many did not agree with what Chris had to say. In fact, many started a petition to get him fired from the franchise. In the meantime, Bachelor Nation has come together to express unity with Rachel Lindsay.

So many members of Bachelor Nation are speaking up following Chris Harrison’s controversial interview with former Bachelorette Rachel Lindsay. Production casted Rachel as the first Black lead associated with the franchise. And, Rachel remains was then and remains a huge advocate for diversity. She is very passionate about speaking out against racial injustice. Many fans love her for this.

This recent interview with Chris has sparked a fire among multiple former leads and contestants. Several are taking to social media to speak out against racism. They want the world to know they support Rachel and what she stands for.

Tayshia Adams spoke and expressed her disappointment in comments that were being made. She said she supports Rachel and wants people to do better. Her fiance Zac Clark shared a joint statement that the majority of Season 16 men released. On the message he said, “Inspired.” He also said, “@tayshia Love you and our love.”

Other men on the season shared the statement as well. The statement said they were part of the most diverse cast in franchise history. They went on to say the conversations that are being had involving those who identify as BIPOC are long overdue. The statement also said, “We stand united in denouncing racist behavior and any defense thereof.” They also said they stand united with Rachel Lindsay.

The women of Matt James season released a similar statement. 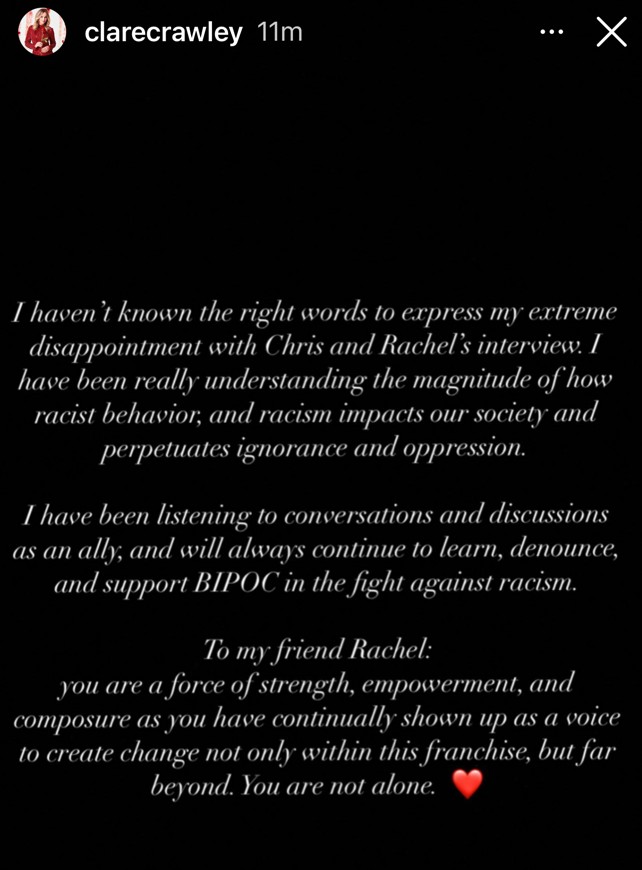 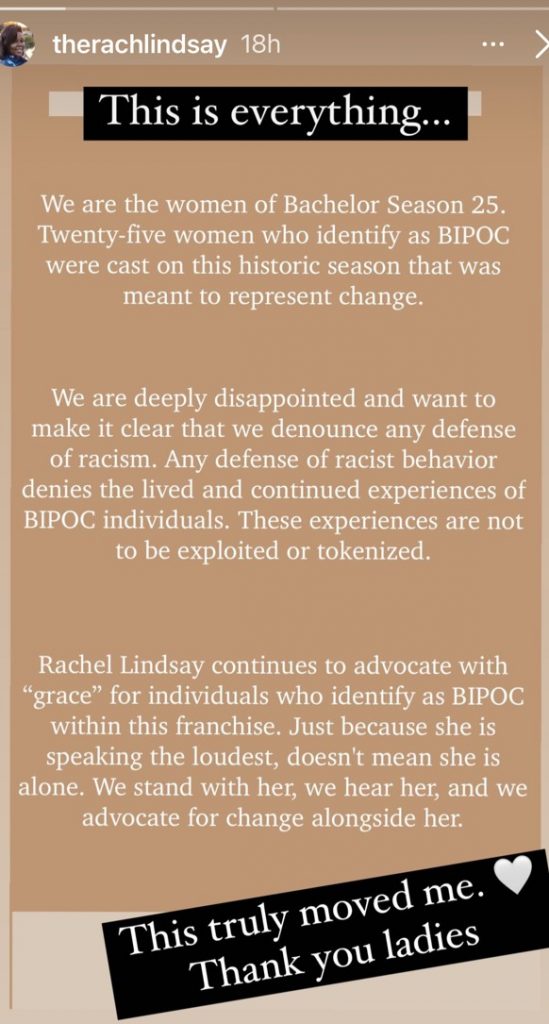 Clare Crawley also spoke out about the issue at hand. In her Instagram Story she spoke out expressing her disappointment with the interview. She continued, “I have been really understanding the magnitude of how racist behavior, and racism impacts our society and perpetuates ignorance and oppression.”

Clare said, “To my friend Rachel: you are a force of strength, empowerment, and composure as you have continually shown up as a voice to create change not only within this franchise, but for beyond. You are not alone.”

Former Bachelor Ben Higgins also released a statement regarding the controversy. He said he watched the interview between Chris and Rachel. He went on to say, “Chris’ statements were harmful. They were not helpful. They hurt many. He is my friend. And sometimes friends do things we have to speak out against. I cannot agree with the comments he made. This is a teachable moment for us all.” 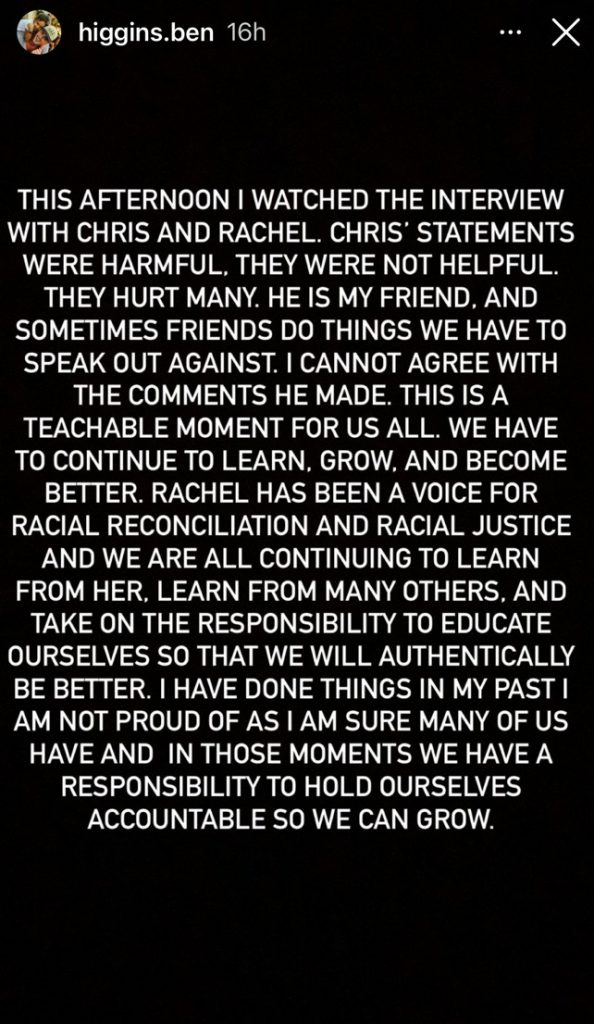 Chris Harrison himself has also spoken up and apologized for the interview. He vowed to do better.

What do you think about the controversy surrounding Rachael Kirkconnell, Chris Harrison and Rachel Lindsay?