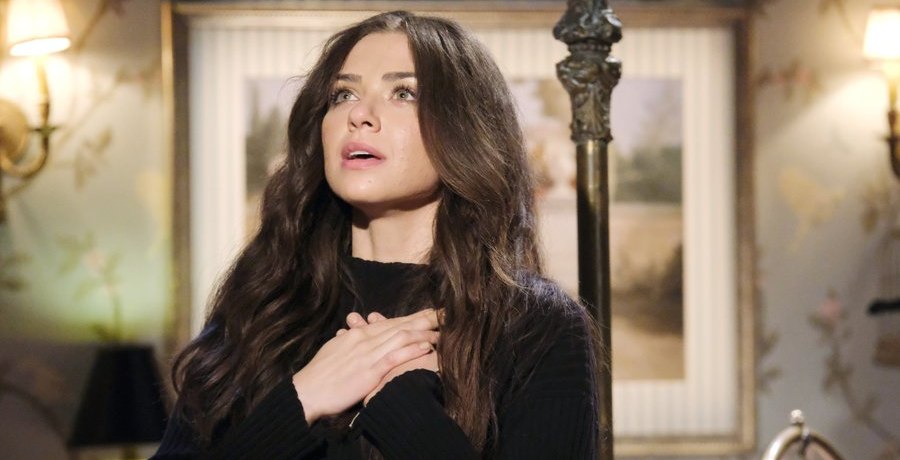 Days of Our Lives spoilers for the week of February 15 show  Ciara Brady (Victoria Konefal) finds a way to get a message to Ben Weston (Robert Scott Wilson). Plus, Jake Lambert (Brandon Barash) isn’t buying his ex-girlfriend Gwen Rizczech’s (Emily O’Brien) story about Laura Horton’s (Jaime Lyne Bauer) death. It a week of doubts and new alliances this week on the NBC soap.

Days of Our Lives Spoilers: Charlie Dale’s Days Are Numbered –  Rafe Gets A New Roommate?

Days of  Our Lives spoilers show Charlie Dale (Mike Manning) is making more enemies than friends. This week his victim Allie Horton (Lindsay Arnold) and her father Lucas Horton (Bryan Dattilo) have a heated confrontation. Indeed, both have reasons for their anger. However, if something should happen to Charlie as suspected with the upcoming WhoDunnIt murder, these two will now be on the suspects’ list.

Ava Vitali (Tamara Braun) is released from the hospital, and her youngest son wastes no time making another threat on her life, according to Days of Our Lives spoilers. So Ava’s bestie Nicole Walker (Ariane Zucker) makes a passionate plea to Rafe Hernandez (Galen Gering) to allow Ava to move into his house so he can keep her safe. Nicole is very persuasive, so it’s likely getting more crowded at Casa Hernandez.

DOOL Spoilers: Ciara Finds A Way To Communicate To Ben  – Rhodes Out, Orpheus In?

Days of Our Lives spoilers for next week say Ciara Brady finds a way to get a text message to Ben. She commandeers Rhodes’ (Jason Downs) phone. Of course, Ciara’s message doesn’t really help with giving her location. She doesn’t know where she is. So look for Ben to ask his brother in law Shawn Brady (Brandon Beemer), to help locate Ciara.

Also, this week Ciara Brady’s captors play musical chairs. Vincent Belman (Michael Teh) is out as the money and brains behind the operation. Now Orpheus (George DelHoyo) is in control, and he doesn’t care if Ciara lives. With Orpheus footing the bill, Days of Our Lives spoilers say, Christian Maddox, aka Evan Frias (Brock Kelly), takes Rhodes’ place as the man on the other side of the glass.

Days of Our Lives watchers recall Jake Lambert probably knows Gwen Rizczech better than anyone else in Salem. After all, they were a couple for years before she took cover at Bayview to escape his mob ties. So it makes sense that he, of all people, will start to doubt Gwen’s version of events surrounding Laura Horton’s death.

Jake is starting to embrace his DiMera side and family obligations, as seen recently on Days of Our Lives. Although he and Chad DiMera (Billy Flynn) are not close, he still has a friendship with his sister-in-law. Since he has reason to doubt Gwen, look for Jake to share his suspicions with Abby this week.

Xander Cook Puts A Ring On Sarah Horton On DOOL

Love is still in the air even after Valentine’s Day is over on Days of Our Lives next week.  Xander Cook (Paul Telfer) had a life-changing week after abruptly quitting his position as CEO at Titan Industries.

Now he realizes all that matters is love. So he decides to ask the love of his life, Sarah Horton (Linsey Godfrey), to make an honest man of him and become his wife. This week we will see the romantic proposal. Will Sarah say yes?

Days of Our Lives spoilers tease of an unlikely alliance between Abigail Deveraux and Gabi Hernandez. Now that Abby knows Gabi didn’t drug her, she apologizes to her former bestie. Then she makes Gabi an offer that Gabi cannot refuse.

Abigail needs Gabi to help her take down her nasty half-sister Gwen on Days of Our Lives. After another heated confrontation at Laura’s grave, Abby realizes Gabi is the only person who can rid her of her sister situation. In return, Abby will work on breaking up Jake and Kate Roberts (Lauren Koslow), allowing Gabi to reclaim the man she returned to Salem for on the NBC soap.