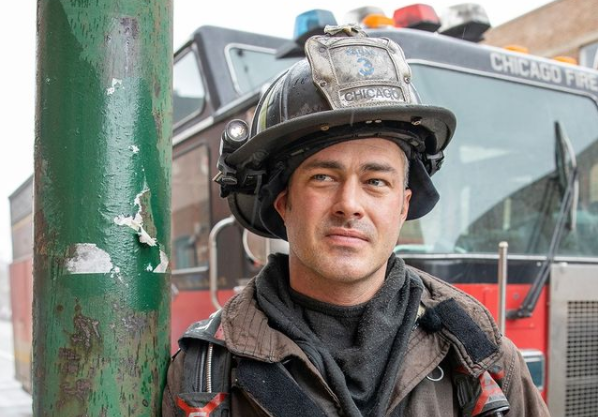 Chicago Fire never fails to deliver the drama, be it emotional saves or heart-wrenching character moments. But one thing that fans of the show have been anticipating for the last two seasons is progress in the fan-favorite Stellaride relationship. During a recent press event, some reporters were able to sneak in a burning question about the couple to Taylor Kinney and Miranda Rae Mayo. The actors were able to speak into the mindset of their characters and hinted at the future of the well-loved couple. But before any progress can be made, the couple has to work through the rough patch they are in currently.

The Chicago Fire fandom has been on eggshells during the last few episodes as they saw one of their beloved characters backsliding into bad habits. Kelly Severide has always been a handle it on my own character. He doesn’t particularly like to rely on other people. But his history of isolationism and non-communication has gotten him into easily avoidable conflict before. This pattern seemed to be repeating itself over the last few episodes as Kelly tries to protect Kidd from gossip by putting distance between them.

Kidd is up for the Lieutenant’s exam and Kelly is approached by a Chief who thinks Stella is moving through the ranks too quickly. Chief Conway puts a bug in Kelly’s ear that the scuttlebutt among the “white shirts” is that Stella is benefitting from their relationship. And Kelly is not about to let anyone look down on his girl. But he decides the best way to prove Stella is worthy of her promotion is to step back.

Kinney explains that Severide knows Kidd is not happy but he thinks he is doing what is best for her. Kinny says:

“I don’t think I’m pulling the wool over [her] eyes. It’s not like he’s trying to hide the thing, because he’s not that good at it. He’s just not good at communicating. So instead of coming out and saying exactly what is on his mind, he comes up with a bunch of pretty bad excuses, which in turn, she sees, and then she’s like, ‘OK, if we’re gonna play this game, I’m out. So, figure it out, and you talk to me later, but I’m not sticking around for this game,’ because she’s sick of it. And I think he comes to terms like, ‘S–t, I gotta get my stuff together,’ and then in the episodes to come, hopefully, he comes to his senses and it works out, and he talks to her.”

Mayo chimed in that Kelly could have opened up to Kidd, but didn’t which is the whole issue, saying.  “Looking back at it now, it’s so funny. He totally could have chosen not to tell her when she was so excited [about the exam], but then [he could have been honest] later that night.”

Thankfully Chicago Fire saw a resolution to the issue in Wednesday night’s Episode 6. When Kelly is backed into a corner and realizes that he royally screwed up he comes clean to Stella. The couple laid out the problem. Then they both make the decision that “I am never gonna let you get away from me again.”

The growth of the couple over the last few seasons has been incredible to watch, and this latest episode demonstrates that this couple is solid. They have their stumbling blocks but they overcome them. Kelly has made tremendous progress as a character. In Season 7 he told Kidd that he knew she deserved a better man than him. Then he followed up telling her, “So I am going to be the man you deserve.”

He followed up this declaration by becoming that man. Kelly also made his intentions abundantly clear in Season 8 during the One Chicago crossover event. He told Stella then that he intended to die as an old man surrounded by her, their kids and grandkids. So Chicago Fire fans now expect an official proposal.

Derek Haas said, “I would be surprised if we got through this season without some kind of big ‘Stellaride’ advancement.”

But the key to this proposal according to Kinney is for Severide to use his words, explaining. “He better hope that he doesn’t try to get engaged psychically. He’s going to have to use his words and talk.”

Kinney knows Severide so well. He even told a funny story about how he thinks the proposal could go down if Kelly is not careful. He explains, “It’d be a Severide move to just hide a ring in the glove box in the car or something and be like, ‘She’ll open it, she’ll find it. And if she doesn’t, then she must not want to marry me. We’re done.’ Hopefully, if it does come to it, he comes up with a better plan than not speaking.”

Well, the Chicago Fire fans are anxiously waiting to see what will happen for Stellaride next.