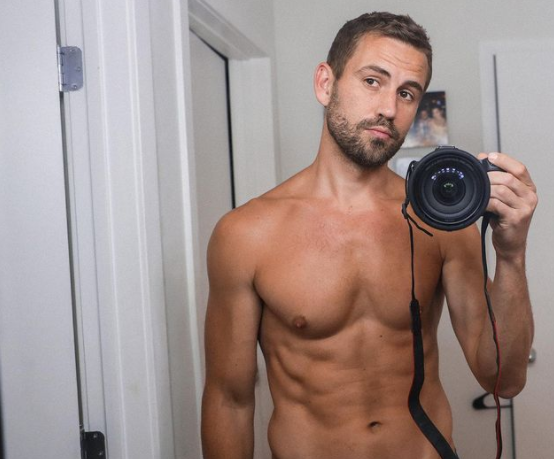 Nick Viall, turned his followers into gooey mush today when he released an adorable video of his girlfriend, Natalie Joy. The pair have been suspected of dating for quite some time, and even seen on her Instagram. But now, it’s Instagram official on Nick’s account.

The former reality star posted on Instagram today and his post certainly was generating a lot of attention. The short clip, posted late Tuesday afternoon, featured his latest girlfriend, Natalie Joy, comfy on a couch reading a book. The 22-year-old surgical tech/ Insta baddie is wearing a towel on her head, clearly having just enjoyed a shower. She is lounging in a relaxed pair of sweatpants and a tank with no makeup on.

The video features Viall holding the camera on Joy, who looks up from her book to stare blankly at him for a moment. The audio overlay is of an applause track [you know like they used on 90’s sitcoms.] After a moment of ‘applause’, Natalie holds her towel and bobs her head forward as if taking a bow. Viall then turns the camera around, to show himself beaming widely, happy to be showing off his new lady.

At the time of this article, the post has been alive a little more than 8 hours and has already received more than 51,000 likes and nearly 1,000 comments.

How Did Nick Viall and Natalie Joy Meet?

The former Bachelor Nation celeb and his new book have been dating since right around the beginning of the pandemic. According to US Weekly, Viall admitted recently, that they met when Natalie ‘slipped into his DM’s on Instagram.’ While the pair have been dating since just before the Year of Our Dark Lord Satan 2020 took a turn for the worse back in March, Nick and Joy opted to keep their relationship away from the public eye, at least for a bit.

The duo recently made their status Insta official when Joy posted a video a while back of herself trying to sneak a kiss from Nick while he was playing a video game.

While most women of America will recognize Nick from a football field away. He’s not the only one in this relationship with fans. Although she has a day job as a certified surgical technician, Natalie has quite the social media following. Additionally, similarly to her boyfriend – most of her followers are from the opposite sex.

So, you have Nick – who has been eye candy for American housewives for several years now – and his new lady – whom, when she’s not sterilizing scalpels is posing in barely their g-string bikinis in various locations. Is having both parties of the relationship being over-sexualized by the media might cause extra strain on their relationship? Friends report this is not the case. A source close to the couple recently told US Weekly that the two are pretty much inseparable. The periodical reports that the young 22-year-old influencer spends so much time at Viall’s home that she might as well move in.

The couple appears well adjusted and seem to have a lot of support coming from both sets of fans.

Do you love getting updates on all your favorite Bachelor Nation personalities? We do too – and we love to share them with you. Check back to TV Shows Ace daily for all the latest tea on your favorite reality stars and shows.