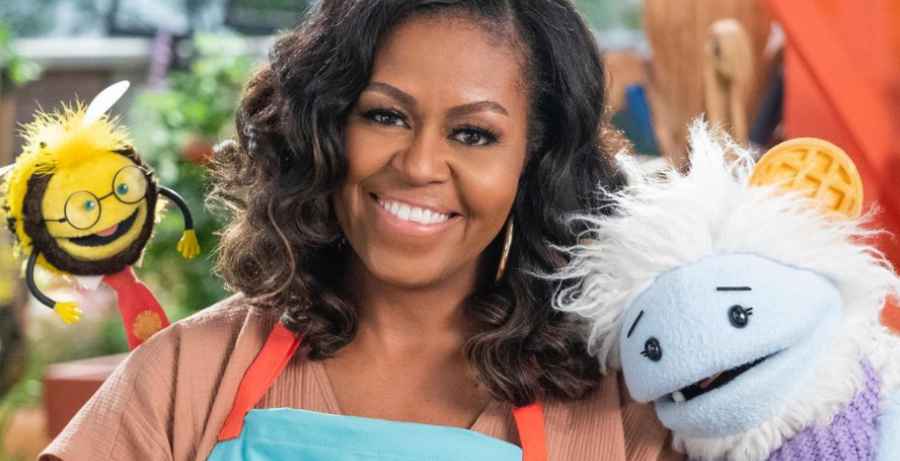 President Barack Obama and former First Lady Michelle Obama recently signed a production deal with Netflix. Now, after signing the deal with the streaming platform, Michelle is launching a children’s cooking series with a couple of cute puppet friends. Waffles + Mochi is coming to Netflix next month.

As part of the former presidential couple’s production deal with Netflix, Michelle Obama will be starring in and producing, a new series. Netflix announced on Tuesday that the upcoming children’s series, Waffles + Mochi, is coming on March 16. Also, Michelle and former President Barack Obama will be executive producers of the series. On top of this, Michelle also confirmed the great news on her Instagram page.

As noted by Yahoo! Entertainment, Michelle will star, along with a couple of friendly puppets, Waffles and Mochi. Jeremy Konner and Erika Thormahlen are the creators of the 10-episode food series. Moreover, the show is aimed at encouraging kids to eat healthily. Of course, it will also make cooking a lot of fun.

The first original preschool series from Higher Ground, and starring @MichelleObama herself, is coming to Netflix on March 16! pic.twitter.com/vKVaZ3vk2l

The official Netflix synopsis reads: “Once upon a thyme, deep in The Land of Frozen Food, lived two best friends named Waffles and Mochi with one shared dream: to become chefs!” The problem with the pair’s ambitions is that everything they cook is made of ice. Now, however, the two “taste-buddies” have suddenly become the freshest employees of a “whimsical supermarket.”

‘Culinary adventure of a lifetime’

Waffles and Mochi are now ready for the “culinary adventure of a lifetime.” The puppet pair will have the help of friendly new faces, including the supermarket owner, Mrs. Obama. They will also be guided by a magical flying shopping cart.

Waffles and Mochi will blast off on “global ingredient missions.” These missions will include visits to restaurants, kitchens, farms and homes all over the world. Waffles and Mochi will then cook up recipes using everyday ingredients together with renowned chefs, home cooks, celebrities and kids. And traveling the world they are! They will be picking potatoes in the Andes of Peru, making Miso in Japan, or sampling spices in Italy. This will give the curious explorers a chance to uncover the world of food. Moreover, they will find that every meal gives them the chance to make new friends.

This new series is an exciting invitation to get kids and grown-ups cooking together in the kitchen. Waffles + Mochi will also allow them to connect to cultures around the world.

Waffles + Mochi is the latest release from Barack and Michelle Obama’s production company, Higher Ground Productions. The production company has a full slate of projects coming to Netflix, as well as the previously released movies, American Factory, Crip Camp and Becoming.

Adults and children can look forward to the debut of Waffles + Mochi with Michelle Obama on Netflix, starting on March 16, 2021. Sounds like a lot of fun to us!