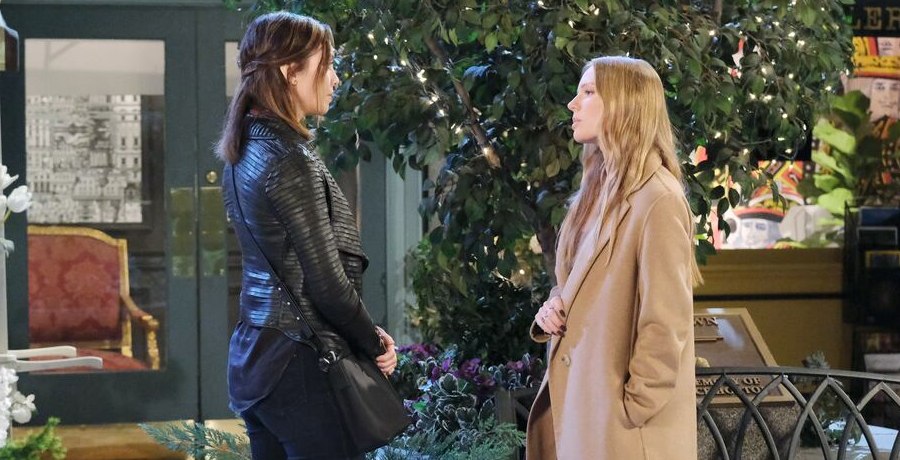 Days of Our Lives spoilers reveal Gwen Rizczech (Emily O’Brien) and Abigail Deveraux (Marci Miller) get into another nasty fight. This time the newly discovered half-sisters get into it at the cemetery as family and friends gather to mourn Laura Horton’s (Jaime Lyne Bauer) accidental death. However, once Abby learns Gwen was the last to see her grandmother alive, it sparks another heated confrontation on the NBC soap.

Days of Our Lives Spoilers: Laura Horton Pays Dearly For Her Lies

Days of Our Lives spoilers show Laura Horton tried to explain to Gwen the reasons she paid of her mother and deprived her of her father as a child. However, Gwen was not in a forgiving mood. In fact, Gwen actually found it funny that her daddy slept with his mother in law. So that was the reasoning behind Laura’s actions. She didn’t want to hurt her daughter’s marriage to Jack.

However, Laura’s need to come clean with Gwen turned out fatal for her per Days of Our Lives spoilers. She might have gotten that off her chest and told Gwen to her face her reasons. But even Laura realized there was nothing she could say or do that could ever change the way Gwen’s life turned out. Plus, after everything Gwen has done to Abigail and Jennifer Horton (Cady McClain), it’s doubtful they’d ever welcome her into the family fold.

As Laura and Gwen’s chat progressed, Gwen grabs Laura’s arm to stop her from leaving. Clearly, she had a few more things to say to her before she went about her merry way, say Days of Our Lives spoilers.  Sadly, after an unfortunate turn of events,  Laura losses her balance hits her head and dies instantly. The death was an accident, but Gwen did say she’d kill the person who ruined her life if she ever learned their identity. Well, that veiled threat was now a reality. So now Gwen needs her daddy to help save her from being charged with a murder that wasn’t her fault.

In the latest #DAYS, Jack tells Gwen he’s sorry that he never knew about her all those years ago. https://t.co/ZsCmiozQaB pic.twitter.com/qpkNrvuMo0

Gwen Rizczech needs her father’s help with the mess she’s in after that chat with Laura Horton ended with her death. Certainly, Gwen didn’t intend for Laura to leave her hotel room in a body bag on Days of Our Lives. However, even though the death was accidental, no one will believe the schemer with violent tendencies didn’t cause Laura’s death. Heck, Jennifer and Abigail certainly won’t believe Gwen’s version of events.

So Now Gwen calls the only person she hopes she can count on per Days of Our Lives spoilers. Jack claims he wants to build a relationship with his eldest daughter. He’s prepared to do what it takes to try to make up for the decades they lost. So now Gwen tests that new pledge of Jack’s. She’s in a pickle with Laura’s death. Only Jack can make this right by covering for Gwen. However by helping Gwen Jack clearly is caught between his two daughters. No doubt a tough place to be. But does he really have a choice?

Days of Our Lives: Abigail Gets Nasty With Gwen Again

There’s no sisterly love between Gwen Rizczech and her little sister Abigail Deveraux on Days of Our Lives. After all, Gwen did drug Abby twice, slept with her husband, and nearly imploded her parents’ marriage by exposing Jack’s one-nighter with Kate Roberts (Lauren Koslow). Certainly, Abby has reasons to hate Gwen. The last time these two saw each other, it resulted in Abby giving Gwen a black eye. Of course, Gwen tried to press charges, but Chad covered for his wife, which ended that. Now once again, Abby comes face to face with Gwen at her grandmother’s grave. Knowing that Gwen was the last one to see Laura alive certainly doesn’t sit well with her. Their father made a decision just like Chad did to cover Gwen’s involvement. However, Abigail isn’t buying Gwen’s innocence. Days of Our Lives spoilers tease Abigail soon turns to an unlikely person to help her with her sister drama.